The Queen Of Spades... 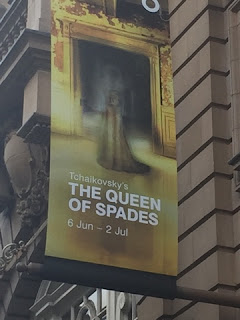 Last Friday night Stuart and I went to see the English National Opera production of Tchaikovsky's The Queen Of Spades at The London Coliseum in London glitzy West End.

This great opera has had people walking out though. So what gives?

Apparently the main cause of their dissatisfaction has been the lesbianism, gay sex threesomes and the stupid animal outfits. So yes, you've guessed right - it's a rather gimmicky production. I can just hear that the first production meeting, "Not too gimmicky is it? The chicken costume?"

There was lovely singing though - especially by the Brits in Acts I & II. Those two yanks were a bit unnecessary - plenty of UK baritones could have done just as well. The Countess was remarkable though in Act III.

By the time the flaming wheelchairs appeared we were laughing 'at' rather than 'with'.

But when we were subjected to the needless rape/oral sex scene in Act III it had got me quite angry - so angry that we were all for leaving rather like many of our fellow patrons did. Not clever.