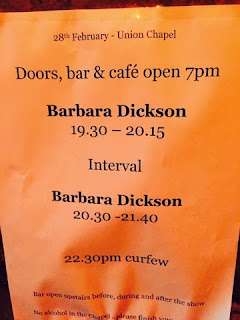 Originally a folk singer back in the 1960s Ms Dickson's pop career started in earnest in the early 1970s and continues through to the present day.

She has worked with the best, had a number one hit with I Know Him So Well and starred in numerous stage shows and television shows.

On the night we were treated to many songs from her back catalogue including Another Suitcase in Another Hall, Answer Me, Wise as a Serpent, Easy Terms, The Ark, Mary Skeffington, In The Bleak Midwinter/Here Comes The Sun, The January Man, Winter Song and of course the wonderful Caravans.