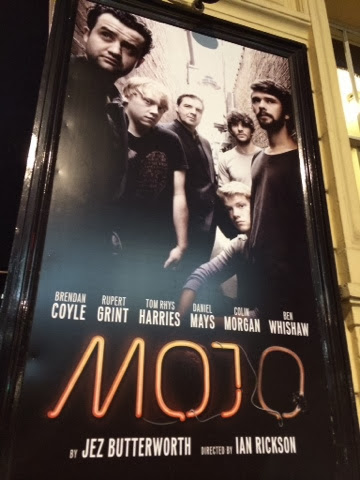 Last night Stuart and I went to see Mojo at the Harold Pinter Theatre in London's glitzy West End.

Written by Jez Butterworth, perhaps more famous for his hit Jerusalem, it's a 1995 written black comedy set in the rock'n'roll scene of 1950s Soho. Savagely funny it delves into the sleazy underworld of nightclub owners and runners.

It's a foul-mouthed world these characters live in with lots of effing and chuffing - Pinter and Tarantino would both be proud. But hearing such profanities on the lips of its all-star cast, who have between a fairly posh canon of work, is at times distracting to say the least. Did Rod Weasley just say 'cunt'?

Daniel Mays is perhaps the stand-out talent here bringing depth, empathy and masterly comic timing to what is at its core a rather dislikeable also-ran character. Special mention should also go to Ben Whishaw who gamely plays the psycho son to the max. And he sings too!

Posted by overyourhead at Friday, November 15, 2013