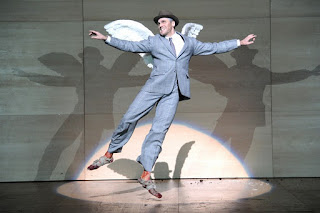 Last night Stu treated me to a very posh night out. We went to the London Coliseum in London's glitzy West End to see Jean-Philippe Rameau's classic baroque opera Castor and Pollux.

The ENO production tells the epic legend of the eponymous twin brothers - one mortal, one immortal. Two sisters, Télaïre and Phébé, are both in love with Castor. Castor loves Télaïre so Phébé gets to play the jealous card to the max. When Castor gets killed in a fight with enemy king Lynceus Pollux in turn kills Lynceus. Castor then promptly pops off to Hades. Pollux frets but is given the choice by Zeus of spending all his time on Mount Olympus or giving half his immortality to his mortal brother. He opts for the latter (so giving half his immortality to Castor), enabling the twins to alternate between Olympus and Hades. The twin brothers are then received into the Zodiac as the constellation of Gemini. It doesn't end quite so well for the girls though.

As Pollux, Roderick Williams projected a real royal nobility, a rich goodness. As Castor, Allan Clayton was excellent conveying a warmth and effortless. Sophie Bevan was exceptional as the beautiful sister Télaïre whilst supposedly ugly sister Phébé, Laura Tatulescu projected the forces of darkness vividly and with power. She also sported a wicked green dress, had a massive heaving bosom and got fingered by a devil's hand - so was naturally our favourite of the night.

All in all Barrie Kosky's staging was great. Slightly avant-garde, enthusiastic, vibrant and thrilling.

Posted by overyourhead at Friday, December 02, 2011