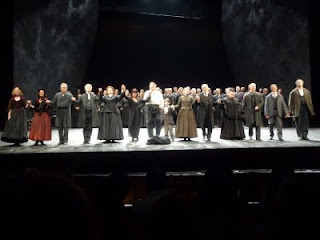 On Friday night Paul and I went to The Royal Opera House to see Benjamin Britten's Peter Grimes. It was unlike anything I'd seen before. A sort of Bertolt Brecht meets Leonard Bernstein. The fishing village was full of gossipy self-righteous but flawed characters. The storm was raging outside. The mob was chasing the 'monster'. It has it all. The work has been called "a powerful allegory of homosexual oppression", and one of "the true operatic masterpieces of the 20th century, but the composer's own contemporary (1948) summation of the work was simpler: "a subject very close to my heart—the struggle of the individual against the masses. The more vicious the society, the more vicious the individual." The crowd scenes were particularly well played with the mob moving like a slithering organism hounding fisherman Peter Grimes for a crime he may, or may not, have commited. Heartily recommended.