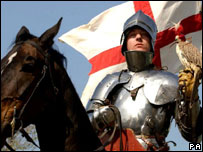 Today is St George's Day. The patron saint of England.

As you may know he wasn't actually English (in fact England didn't really come into being for another 700 years after St George death). No, St George was actually born in Turkey in 3rd century AD. His parents were Christian, he later lived in Palestine where he became a Roman soldier but protested against Rome's persecution of Christians. He was then imprisoned and tortured, but stayed true to his faith, before being beheaded at Lydda in Palestine. The 23rd April was named as Saint George's day way back in 1222.

He is patron saint not only of England but also of Aragon, Canada, Catalonia, China, England, Ethiopia, Georgia, Germany, Greece, Lithuania, Montenegro, Palestine, Portugal, Russia, and Serbia, as well as the cities of Amersfoort, Beirut, Ferrara, Freiburg, Genoa, Istanbul, Ljubljana, Moscow and Venice (second to Saint Mark). He's also patron saint of soldiers, archers, cavalry and chivalry, farmers and field workers, riders and saddlers, and he helps those suffering from leprosy, plague and syphilis(!) In recent years he has been adopted as patron saint of Scouts. Also isn't St George the patron saint of ASDA?
Posted by overyourhead at Wednesday, April 23, 2008