The Ocean at the End of the Lane @ Duke of York's Theatre... 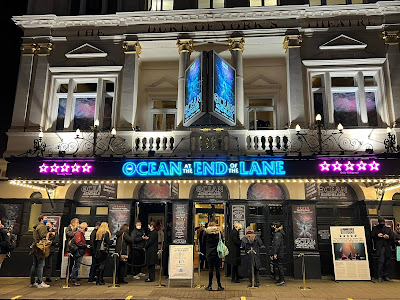 Last Friday night Stuart and I went to see the acclaimed production from the National Theatre of Neil Gaiman's The Ocean at the End of the Lane at the Duke of York's Theatre in London's glitzy West End.

Adapted by Joel Horwood, this spectacular and thrilling adventure directed by Katy Rudd, is a theatrical tour de force of imagination and storytelling.

Returning to his childhood home, a man finds himself standing beside the pond of the old Sussex farmhouse where he used to play. He’s transported back to his 12th birthday when his friend Lettie claimed it wasn’t a pond at all, but an ocean... A portal into another world. Plunged into this magical world, their survival depends on their ability to reckon with ancient forces that threaten to destroy everything around them.

The production is an enveloping and enthralling theatrical experience that uses magic, puppetry, music and lighting to great effect. Family friendly too, despite the show starting with a suicide!
Posted by overyourhead at Monday, December 06, 2021