Tenet - strap yourself in and enjoy the ride. And see if you can spot a topical reference to a "mutant algorithm"!.. 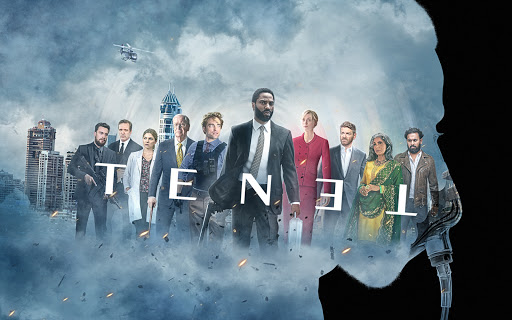 It was weird going back to the cinema after such a long time; lots of social-distancing in the seats sold, face coverings all round, lots of extra staff on hand, and dozens of hand sanitiser dispensers.

The reviews for Tenet have all been fairly glowing so far and I'd largely concur. Although as with any sci-fi action blockbuster, there are always enough plot holes to drive a Batmobile through!

However, if you take my advice, you just strap yourself in and enjoy the ride. And see if you can spot a topical reference to a "mutant algorithm"!

**BELOW LIE THEM THERE SPOILERS (BUT NOT THE ENDING)**

Christopher Nolan is obviously a big fan of The Night Manager, James Bond, and to a lesser degree Doctor Who's River Song.

The physics bit as used in Tenet...

Time is an illusion. Or so they say. There is no global "now".

One natural conclusion of General Relativity is that all events are real. All events. So events in the past and future have already happened. A non-intuitive idea of course because we remember the past, not the future.

Time travel in films and TV often relies upon this idea. Most film and TV use the idea of traveling faster than the speed of light or bending space-time so people and object suddenly jump into the past or the future.

Not so in Tenet.

Tenet correctly acknowledges that time is simply the direction of entropy.

Entropy (the measure of disorder) being one of the few quantities in the physical sciences that require a particular direction for time.

The second law of thermodynamics says, the entropy of an isolated system can only increase, but cannot decrease. Therefore the arrow of time only goes "forward" in time not backwards. Ice melts. Hot turns to cold. Your bedroom gets more messy not less.

Tenet imagines a future 'magical' method of decreasing the entropy for an object in such away that it reserves this own arrow of time for that object. They call it 'inverting the entropy'. So it gets colder when you heat it not hotter. When you throw it away it comes back. Bullet's get unshot. The inverted object experiences the world backwards locally even in a world where time for everyone else generally flows forward.

Significantly this inverted object or person travels through time at the same rate as everyone else but in reverse. So no sudden jumps into the past or into the future.

And if, Tenet supposes, those inverted objects were to start appearing from the future into the present, why were they being sent here, and how could a bad guy use them to his own evil ends?

Watch Tenet to find out.

And the Grandfather Paradox gets acknowledged and promptly ignored!

And the baddy's modus operandi seems to be "if I can't have it, no one can".

Posted by overyourhead at Thursday, August 27, 2020