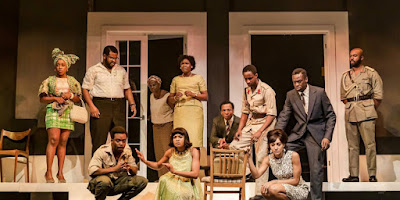 Last night Stuart and I went to see Chekhov’s The Three Sisters at Lyttelton Theatre on London's glitzy South Bank.

And it was a corker.

In Inua Ellams’ adaptation, we are transported not to pre-revolutionary Russia but to 1960s Nigeria. The Prozorovs are now the Onuzos.

The three sisters of the title are Lolo, Nne Chukwu and Udo. They started life growing up with their parents and their older brother among the bright lights and cosmopolitan culture of Lagos. Now they live in the small village of Owerri where they occupy themselves with ordinary things: eldest child Lolo (Sarah Niles), a teacher at the local school, is passionate about education; Nne Chukwu (Natalie Simpson) is bored of her marriage; Udo (Racheal Ofori) is a daydreamer.

All of them long for a return to Lagos, but it cannot happen as things there are too difficult. Tensions between the Biafran people and the people of Nigeria have been building for some time and war is expected to arrive. Eventually it does. Along with unimaginable levels of bloodshed.

The specificity of Chekhov’s Three Sisters creates a universality that proves fertile ground for Ellams. His adaptation, which takes place during the three years of active combat, explores Britain’s shameful role in the Biafran War, the devastation of colonialism and the futility of the fight for emancipation. But at its heart, this remains a play about family – how they love each other, fight with one another, and ultimately how they come together in times of crisis.

Katrina Lindsay’s set design is a behemoth. Initially depicting the facade and porch of the opulent Onuzo household, built by Papa Onuzo with his hands and with love, as time moves on, its grandeur melts into the darkness. In the end, all that is left is dry, overgrown grass, a stark symbol of everything lost in the war.

The performances in Nadia Fall’s compelling production are uniformly excellent. Niles, Simpson and Ofori beautifully embody the distinct energies of the sisters. Together, they form a pillar of strength and anchor the piece dramatically and emotionally.

Ronkẹ Adékoluẹjo is also sensational as Abosede; her transformation from awkward and poorly dressed local girl to an ostentatious and salty matriarch is wonderful to behold.

The play lasts over three hours. But it flew by.

There’s something incredibly powerful about seeing elements of Nigerian culture and heritage represented in Ellams’ stirring adaptation. I imagine that for many Nigerian-Britons living in the UK, the former Republic of Biafra – now split into several states within Nigeria – is where their parents called home and somewhere many of their grandparents fought to defend.