Touching The Void @ The Duke of York's Theatre... 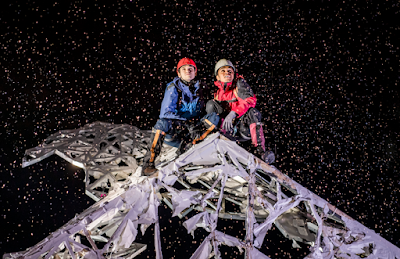 Last Friday night Stuart and I went to see mountaineering thriller Touching The Void at the Duke of York's Theatre in London's glitzy West End.

The plot concerns Joe Simpson and Simon Yates's disastrous, and near-fatal, climb of the mountain Siula Grande in the Cordillera Huayhuash in the Peruvian Andes, in 1985. It is based on Simpson's 1988 book of the same name. Many people might have also seen the critically acclaimed Touching the Void PBS documentary too.

The story is that Simpson and Yates, both experienced mountaineers, set out to ascend the previously unclimbed West Face of Siula Grande in Peru. Though they reach the summit, a powerful storm develops and Simpson suffers a badly broken leg in a fall during the descent. The pair attempt a self-rescue, deciding to lower Simpson with ropes down the steep and snowy slope while an enormous storm rages on. Yates cannot see where he is lowering Simpson, and inadvertently lowers him over the edge of a large cliff, leaving him suspended by the rope in mid-air. Yates arrests his fall, but cannot see the predicament his partner is in, nor hear him over the howling wind.

Unable to pull Simpson back over the cliff and gradually losing traction in the loose snow, Yates realizes after about an hour that there is little chance of recovery from this situation for either of them and he decides to cut the rope connecting him with Simpson. Yates descends after surviving a sub-zero and stormy night on the mountain but cannot find his partner. He assumes Simpson is dead and returns to the base camp alone, where he stays to recover.

Simpson, however, has actually survived the fall and is now trapped in a large crevasse. He manages to lower himself further into the dark abyss and finds an exit leading to the base of the mountain. He then spends days crawling back to base camp across glaciers and rocks, despite his broken leg, frostbite, and severe dehydration. Exhausted and near delirium, Simpson reaches camp only a few hours before Yates intends to leave and return to civilization.

In reality, Simpson fully accepted that Yates did the right thing by cutting the rope, and risked his own life to help save Simpson's life, and has always defended him on that matter.

The Duke of York's show itself is fine. The actors clamber up and down some steep staging attached to tightly held ropes and the fake wind and snow and dramatic drops are convincing and fully realised. However, perhaps less convincing on the night we saw it was the computer control system power outage. This left the staging unable to move, the house lights up for 30 minutes, and us watching the technicians trying to fix it.

The play and the climbing ropes both rather lost their tension at that point.

An OK show, perhaps a little over-wrought at times though. Great story though.

Posted by overyourhead at Tuesday, December 03, 2019