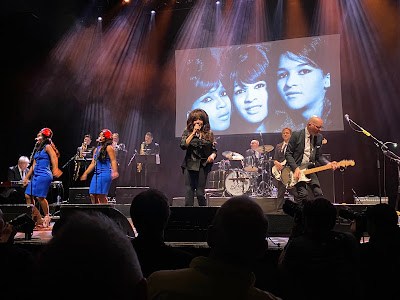 Last night Stuart and I found ourselves watching Ronnie Spector and The Ronettes show the "Best Christmas Party Ever!" at O2 Shepherds Bush Empire in London's glitzy Shepherds Bush.

Veronica Yvette Bennett as she was born might be 76 years old but she sure can still belt them out. And more amazing still, she's still here.

Brought up by her African-American/Cherokee mother and Irish-American father in Spanish Harlem, at a tender age Ronnie met and married record producer Phil Spector. With the Ronettes she went on to have classic hits like "Be My Baby", "Baby, I Love You", "(The Best Part of) Breakin' Up", "Do I Love You?", and "Walking in the Rain". So far, so rock and roll.

Only Phil became jealous and subjected Ronnie to years of psychological torment. He sabotaged her career by forbidding her to perform live, surrounded the house with barbed wire and guard dogs, and confiscated her shoes to keep her from leaving. On the rare occasions he allowed her out alone, Ronnie had to drive with a life-size dummy of Phil. Soon, she began drinking and attending AA meetings to escape the house. According to Ronnie, Phil installed a gold coffin with a glass top in the basement, promising that he would kill her and display her corpse if she ever left him, then stated "I can keep my eye on you after you’re dead." In their 1974 divorce settlement Ronnie forfeited all future record earnings because Phil threatened to have a hit man kill her. She received $25,000, a used car and monthly alimony of $2,500 for five years. In 1998, Ronnie testified that Phil had frequently pulled a gun on her during their marriage and threatened to kill her unless she surrendered custody of their children. 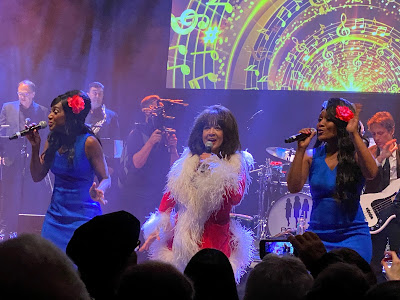 So here she was, standing in front of us, beaming. A survivor.

The only sour note in the next two hours perhaps was this was a Christmas show - and a really cheesy Christmas show at that! But that said, the band was great, the Ronettes were great, and Ronnie was a little powerhouse. We swayed, we marvelled, and we sang along just happy to be in the presence of a genuine star.

Set 1
Intro (Spanish Harlem)
Frosty the Snow Man (Gene Autry cover)
Because (The Dave Clark Five cover)
Do I Love You
It's Christmas Once Again (Frankie Lymon cover)
Baby, I Love You
Under the Mistletoe
What'd I Say (Ray Charles cover) 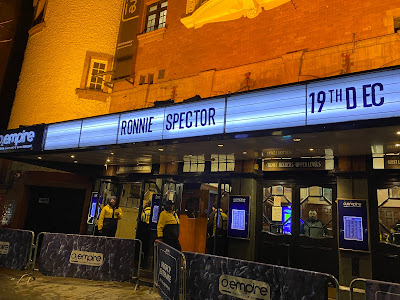 (The Best Part of) Breakin' Up
How Can You Mend a Broken Heart? (Bee Gees cover)
Happy Holidays
Back to Black (Amy Winehouse cover)
Be My Baby (Ellie Greenwich cover)