Shipwreck @FisayoAkinade is simply astonishing... a stunning award-winning performance... that stays with us as we walk home. @AlmeidaTheatre @rupertgoold 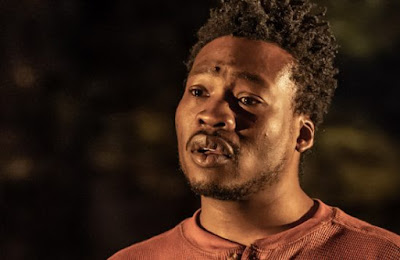 Last Friday night Stuart and I went to see Shipwreck at the Almeida Theatre in London's glitzy Islington.

Shipwreck is written by Anne Washburn, directed by Rupert Goold, and was a play of two halves.

The first was a darkly comic piece, largely about Donald Trump that sets out its stall fairly early on; "Don't you think we should at least consider the possibility that Trump is the Antichrist?"

The characters are white liberal middle-class New Yorkers wringing their hands about how dreadful Trump is. The cast are great (Tara Fitzgerald, Risteárd Cooper, and Raquel Cassidy all fantastic) although things perhaps more as less play out as one might expect. Everyone gets to bitch about what a terrible person Trump is, complain about how he lies with impunity, and moan about what the future might hold. There are a couple of predictable twists too as we come to discover that not everyone is quite on the same page politically. The play imagines Trump knows what he is doing - a bold assertion!

This part of the action takes place in more or less present day and draws upon recently political machinations in the United States. Which of course gives the piece a built-in shelf life. With the faster turnaround afforded television satire any stage play's attempt at outrage to recent events is always going to suffer from being behind the news curve somewhat. There is always some more outrageous Trump tweet, new political scandal, or new International incident that supersedes the subject matter in any play written even six months ago. 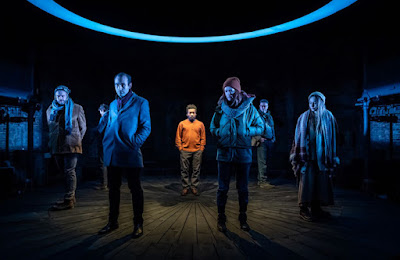 That said, there is a particular poignant moment towards the end when a character sets out his reasons for supporting Trump - his concerns on not being listened to, on immigration, on integration, and on being 'left behind'. It is difficult to hear but an important counterpoint nevertheless.

This concern with immigration chimes with the second, largely separate strand of the play that runs in parallel with the main action. This parallel piece is far more haunting, moving and powerful than the liberal bellyaching. It is about race.

Fisayo Akinade plays an adopted African child who has grown up in a white American community. He feels disconnected, different, and alienated. His performance is simply astonishing. He had us in tears with his tales of growing up in the heartland of modern American, the recollections of the atrocities of the slave trade, the verbal and physical abuse that black people experienced then and now, and the few but precious hard-won triumphs. It was a stunning award-winning performance that required a play all of its own.

A somewhat clunky ending brings the two halves of the play together but it is Akinade's performance that stays with us as we walk home. A great night at the theatre.
Posted by overyourhead at Tuesday, March 19, 2019