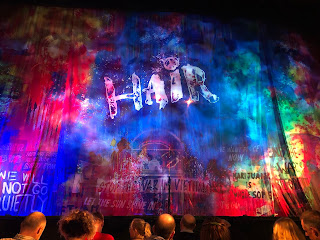 Last Saturday night Stuart and I went to see the latest incarnation of our favourite musical Hair at the New Wimbledon Theatre on the glitzy Wimbledon Broadway.

Starring muscled reality-TV 'stars' Jake Quickenden and Marcus Collins, and Hollyoaker Daisy Wood-Davis, this touring production has had a number of cast revisions since its inception a few years back. And sadly these revisions have been its downfall.

This production first started life at the Hope Mill Theatre in Manchester - and the show was a smash from the get-go. Yes, Hair has a great set of songs, but we were treated to inventive staging, and a great cast of actors/singers.

Whatsmore when it transferred to the Vaults in Waterloo later that same year it reached even greater heights - winning critical praise, public acclaim, and numerous awards. If anything, the small changes to the cast for the London transfer had improved things. The had show lost none of its punch. 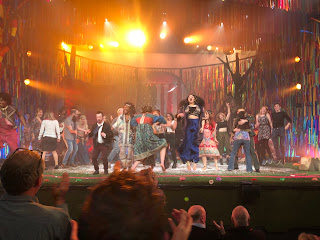 So now we come to the touring production and its celebrity casting. Oh dear, oh dear. How can the same show, the same words, the same music, the same orchestrations, miss the mark so widely? Well, I can tell you how. It is the new cast. Only one person has survived the transfer from Vaults to the road and the show has completely lost its heart.

Yes, the new cast can sing. But it was as if the show was being sung at us and not performed for us. We were so disappointed.

My only hope is that the cast grow into their roles and we start to believe in them more.

Because we are going to see this touring production again. And again. And again. We are following it around the South East. And we can only hope we see Hair raising its game.
Posted by overyourhead at Tuesday, March 26, 2019