The Writer @AlmeidaTheatre Wow, that a play! A thrillingly shifting feminist drama that quite rightly sends audiences out of the theatre conflicted, thrilled ,and arguing.... 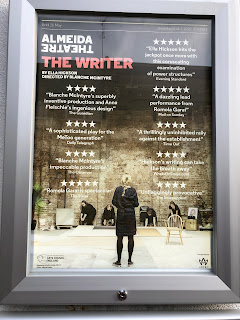 Last night Stuart and I went to see Ella Hickson's new play The Writer at the Almeida Theatre in London's glitzy Islington.

Wow, that a play! A thrillingly shifting feminist drama that quite rightly sends audiences out of the theatre conflicted, thrilled ,and arguing.

It is a play about the theatre, about art and about the creative process. It is about the difficulties faced by women trying to create something true to themselves as an artist, without giving in to the expectations of men, or the pressure to produce something safe and sellable. It takes on two biggies - patriarchy and capitalism - and largely wins.

And what a clever play this is. It is an assault on the stage. It savages the theatrical status quo. It shakes and splinters with wrath. Anyone interested in the theatre should see The Writer.

It opens explosively. A young woman (Lara Rossi) emerges from the audience to collect a bag she has left behind. She is confronted by a man (Sam West, brilliantly repulsive) who asks her what she thought of the play they have both just seen and which – it turns out – he has directed. Her furious denunciation of its commercial and pointless nature points angrily to many tropes women writers and viewers despise so much in current theatre – "the old men saying fascinating things about time and history while women in hot pants lean over desks", the rape added for theatrical effect, the way audiences assess what a woman looks like while wanting to know what a man thinks. It's sharp, savage stuff and becomes more interesting when the woman reveals that the man had once made a pass at her, just after he had praised her first play, which has made her doubt herself. "I wanted the job because I was talented, not because I was fuckable."

So far so predictable. But then everything changes. It was all an act. Or rather is was all actors.

We are suddenly plunged into an awkward Q&A session and we realise that what we have seen before was actually the reading of a scene written by another writer (Romola Garai) who is nervously presenting it for the first time and being subtly undermined by her own director (Michael Gould). The actors in the Q&A throw up objections to the earlier scene – "ranty" is one of them. But then they themselves are undermined by the next vision. Yes, this is a play that tells you what it is not just by showing but by moving. It’s a play of continually collapsing walls: each scene is as provisional as Anna Fleishle’s brilliant design, which hauls flat screens up from the floor to turn them into backdrops. A view of the London Gherkin, a cardboard-looking wallpapered set; bright flowers.

Things get even more complicated from that point onwards and include the arrival of a live baby who is not the writer's but "belongs to a woman in the wings" and a scene set in a wild jungle. The set is constructed and deconstructed before our eyes, as the action swings in unexpected directions, always bound together by Garai's watchful presence.

Each episode argues with the previous one. A very neat naturalistic dialogue involving cassoulet, disobliging sex and career pressure gives way to a scene of women behaving wildly: woad in the woods; huge shadows looming like Easter Island statues; stage and actors encased in zebra stripes.

But the piece is tightly structured, with scenes mirroring each other. There are two painfully realistic sex scenes on sofas, two confrontations with lovers, two conversations between writer and director. Themes are twinned too, built on sets of opposites – money versus art, pretension and vocation, pretend and real. Issues of gender, of race, of desire for your own sex, of the politics of sex and desire, are all flung into the mix.

Although at two hours straight through the play is marginally too long, Hickson's writing can take the breath away. There's a marvellously vivid moment when the writer says selling her script to cinema would be "like letting strangers do plastic surgery on your unborn child to make it more fuckable" which is one of those images that is hard to let go.

The whole piece is so massively meta, like a series of Chinese boxes, that some will find it irritating. But I loved its underlying passion, particularly about the function of art – whether it is indeed a holy thing, or whether none of it really matters. It's a barb that cuts deep and makes an audience think.

It is also hard to resist a piece, beautifully and sensitively directed by Blanche McIntyre, that stars Garai at her most powerful. The amount of detail she brings to a performance that could so easily descend into generalised anger and grief is really astonishing. Her great cries for freedom, for blood, for the truth, in her series of encounters with passive aggressive directors and lovers (of both genders) are the engine that drive this interesting, compelling play.

The Writer is an eloquent, intellectually agile, vividly written and frequently furious play. It feels like the result of years of pent-up frustration about the way that stories get told on our stages, who tells them and how, and the constant compromises that women are obliged to make in this industry, and in the wider world.

Blanche McIntyre directs all this with customary dexterity and alertness to the work. It’s a perfect union of writer and director. The cast grasps it too. Garai is spectacular. She morphs from a tongue-tied aspiring new writer – cowed by those around her and almost constantly apologising, for occupying this platform at all, for having the temerity to have something to say and a wish to say it in the way she wants – to an altogether more confident figure who nonetheless lets men shut her down or sway her choices. There are moments when she rages, when she burns with fury, at her self and the world.

There is a lot of onstage eating, too. The food is real. Appetite is all. The final scene makes it plain that none of this is enough. Even though there isn’t a single man on stage, the patriarchy remains intact – there’s still a great big dick in the room, literally and figuratively.

It’s strange how so often we use the language of violence to describe things that affect us. We say: "It packs a punch", "It's hard hitting". The Writer makes it clear that it’s time to use new tools, to think differently, talk differently, live differently.