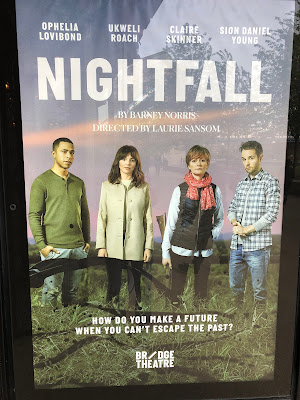 The reviews have been rather sniffy about it - comparing it unfavourably to Mike Bartlett's Albion at the Almeida Theatre - but we really quite enjoyed it.

The story is one of love, desperation and resentment of everyday country folk: specifically, a farming family in debt and in crisis, on the rural Hampshire borders. The father has died, leaving responsibility for the farm to his son Ryan (Sion Daniel Young - yes, him off of War Horse and Curious Incident...), along with £200,000 of unpaid bills. Ryan calls up his mate Pete (Ukweli Roach - yes, him off of Blindspot) to help do a bit of unauthorised welding work on an oil pipeline that runs through the farm, so they can siphon some off into a tank for private use. Except that Pete, an ex of Ryan’s sister Lou (Ophelia Lovibond - yes, her off of W1A), has done time in jail already for drunken assault, and is risking a lot with this kind of caper.

The situation is complicated as Pete is also there to rekindle his relationship with Lou and the siblings' mother Jenny (Claire Skinner - yes, the mum off of Outnumbered) is so stymied by grief and a rose-tinted desperation to preserve their way of life that she barely registers her children’s misery.

Conflict leads to further revelations and the drama that follows. Soon they are all at each other’s throats. But there’s enough tenderness to the story-telling and nuance to the performances to keep this play free of sensation. Instead it’s an elegy, an intimate look at waste, loss and the lies we tell ourselves.

It’s a story imbued with the themes of decay and lost livelihoods that have become rather a trademark for writer Barney Norris (Visitors, 2014; Eventide 2015 While We're Here 2017).

The naturalistic dialogue is peppered with striking moments of lyricism. The writing is exquisite, even if it sometimes feels a touch too artful and poetic to come out of the characters’ mouths.

Aside from a few moments of wry comedy Nightfall is bleak watch; we see the character’s hopes and dreams seeping away and leaking out like the oil that Ryan’s siphoning off into his own tank.

The auditorium last night was half empty which is a shame. This is new writing true, but fine writing all the same.
Posted by overyourhead at Thursday, May 17, 2018