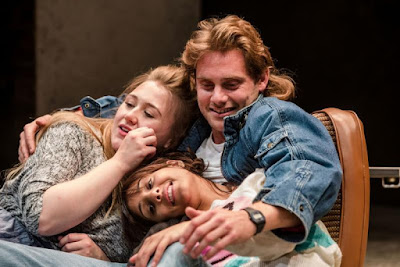 Last Friday night Stuart and I went to see iconic 1980s play Rita, Sue and Bob Too at the Royal Court in London's glitzy Sloane Square.

This Thatcher-era 1982-set, moving, funny, rude, sex-filled, f-bomb and c-bomb festooned classic is invigorated here afresh having survived its off again/on again status after charges of inappropriate behaviour that were brought against its original director. All praise then to current Royal Court supremo, Vicky Featherstone, for reversing her initial cancellation and allowing Kate Wasserberg's terrific production to get the London run it deserves. The late Andrea Dunbar, the play's commendably fearless and funny author, deserves nothing less.

The first of the play's many short, often stinging scenes is a marvel of construction. With an economy that you don't learn in writing class, Dunbar introduces the complicated tripartite web of desire, playfulness and desperation that exists between the 27-year-old and married serial liar Bob (James Atherton) and the two 15-year-old teenagers to whom he is giving a lift home from a babysitting gig. After initial banter involving such unknown (to the young Rita and Sue, anyway) words as Durex, Bob drops his trousers first for Sue (Gemma Dobson) and then Rita (Taj Atwal).

It's both funny and shocking as we watch the girls as they watch each other as Bob goes at it in the front seat, pumping away, trousers around his knees and squabbling about who has the first turn. Here the girls are not victims – well, not simply victims - but quick-witted avid women who are up for "a jump". Bob is their escape. Their entry into the adult world.

"His legs weren't half hairy," is Rita's succinct after-the-fact appraisal of the event, her admission that it hurt a bit along the way swept up in both women's self-evident excitement and expectation that these vehicular liaisons with Bob will happen again. As indeed they do. Bob's cockiness is set to continue.

The affair plays out to slowed down versions of 1980s classic tunes such as Soft Cell's Tainted Love as Rita and Sue clash first with their parents (tart-tongued mum Sally Bankes and oafish, beer-swilling dad David Walker), then Bob's wife Michelle (Samantha Robinson), and finally each other.

It's a great production, well-acted and well directed.

The 1987 screen version of Rita, Sue and Bob Too was a scream with its cast including Doctor Who's Lesley Sharp and Happy Valley's Siobhan Finneran. The 80 uninterrupted minutes here are equally funny (and equally rude!)
Posted by overyourhead at Tuesday, January 16, 2018