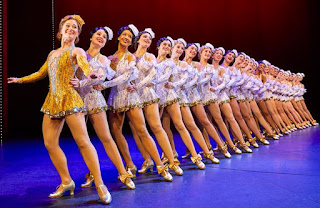 Synopsis: Paper thin plot but wow what a show!

There are few more famous openings in musical theatre: the curtain rises a few inches, just enough to reveal a line of tap shoes thundering away. 42nd Street, the ultimate backstage musical, is a blunt force trauma of a show. It roars where others purr. Mark Bramble, who co-wrote the book for original 1980 Broadway show, in turn based on the 1933 MGM smash film, continues his long association with the musical as director here.

And it’s an extraordinary thing, crammed with songs by Al Dubin and Harry Warren, full of the sound and fury of tapping feet, illuminated by dazzling colour. So much so, in fact, that it’s easy to ignore the fact that by interval time nothing has really happened.

Famed director Julian Marsh is putting on a huge show, Pretty Lady, in the middle of the Great Depression. “This is April 3rd 1933 and we start work on a new show”, he says helpfully, embodying the show’s characteristic avoidance of subtlety. Erstwhile star Dorothy Brock has been reluctantly cast as the lead so that the producers can get a wedge of investment money from her rich beau.

A young woman from small town Pennsylvania, Peggy Sawyer, rolls up late looking for a job in the chorus line. She's an instant hit with the show's leading man, not so much anyone else. Eventually – and not before a lot of songs and dances – Brock breaks her ankle, Sawyer steps up and the dream comes alive for everyone.

It’s a show with a strange history: its original director, Gower Champion, died on opening night in 1980. Catherine Zeta-Jones was propelled from chorus girl to star in the 1984 West End production in this same theatre. Bramble has been there all the way, and he clearly knows this piece inside out, and that’s apparent from the occasional flashes of real complexity in the production.

The production recognises the rust that’s bloomed on many of these MGM-era tropes and it paints them with silliness, rather than seriousness. The hackneyed lines – “Sawyer, you're going out a youngster but you've got to come back a star!” – are played for laughs and the zero-to-hero ridiculousness of the story and its setting is amplified.

Every number, from familiar songs like Keep Young and Beautiful and Shuffle Off to Buffalo to lesser known numbers like Boulevard of Broken Dreams (added to the production especially to showcase Sheena Easton’s voice) swells to a huge climax and although there are a few forgettable performances, perhaps inevitable in a cast of 48, the good ones are great.

Tom Lister doesn't make Julian Marsh the dictator he's often played as. Instead there's more of a 'firm but fair' vibe. It means that, until Lister can show off his powerful baritone voice late in the show, the character is somewhat diminished, especially in the midst of three extraordinary women.

Clare Halse as Peggy is, without doubt, a phenomenal dancer. She moves so fast and with such precision that in some moments her legs are a blur. She’s got the acting skill too, an endearing brew of optimism and bewilderment, with a sharp comic sense – “eyes shining like a kid at Christmas” as one of the characters describes her. But she’s a whisper of a threat away from the triple, with a voice that doesn’t knock one’s socks off in the way her dancing does.

Jasna Ivir is hilarious as Pretty Lady’s composer Maggie Jones and, in her West End debut, Sheena Easton’s sneers and snarls as Dorothy Brock almost push her diva routine into panto villain territory, but it sets the tone for whole show – one of embracing the silliness, revelling in the recognisability of all the old Golden Age cliches.

Everything conjures the America of the 1930s – except the accents, most of which got lost somewhere across the Atlantic. Douglas W Schmidt’s set and Roger Kirk’s costumes – every colour dialled up a hue – show just how appealing the theatre would have been in the Great Depression, a world full of smiles and sequins.

One scene sees four urchins find a dime in a gutter, and within seconds colossal coins are rolled onto the stage and set down like circular stages, danced upon by chorines wearing all the spangles and glitter in the world. Opulence and escapism meet Depression-era America head on, a reminder that the 1933 film’s colossal success was due in no small part to the feel-good and consequence-free lavishness it offered in contrast to the poverty of its audience’s lives.

In a brilliant hat-tip to the iconic film, during one chorus scene a giant art deco mirror hangs above the stage and we see the dancers blossom and grow into abstract geometric shapes. Busby Berkeley’s groundbreaking film choreography is resurrected in glorious Technicolor onstage.

The musical has always been about immensity: subtlety begone, nothing by halves. It’s a show that can say all it needs to through numbers alone: 48 cast members, 432 costumes, 2,000 lights; it holds, and has shattered, Broadway records. Sometimes that magnitude, that earth-quaking rumble of dancing feet is enough to sustain it. It can survive through sheer size.

But, here and now, it’s combined with a nascent West End nostalgia kick and seems to be tapping (sorry) into an audience that is desperate for the classics. An American in Paris opened a couple of weeks ago, borrowing from the Gershwins’ songbook, there was La La Land of course, Sunset Boulevard – in fact the producers of the recent Glenn Close production, Michael Grade and Michael Linnit, also produced this show.

We may not be in the middle of a major economic depression, but things aren’t looking that rosy at the moment either. A show that’s all about pretence is well timed. 42nd Street is where the underground meets the elite, and that’s what theatre is too: a girl from small town Pennsylvania has to pretend to be a star; chorines crammed 10 to a dressing room backstage have to conjure incredible worlds on stage.

When that army of dancers gets going, when the rows of lights start twinkling and tap shoes hit the bleachers extending towards the audience from the back of the stage, it’s simply, overwhelmingly, stunning.
Posted by overyourhead at Tuesday, April 11, 2017