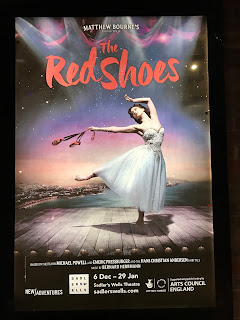 Last Friday night Stuart and I went to see The Red Shoes at the Sadler’s Wells Theatre in London's glitzy Islington.

This most recent of Matthew Bourne's works is perhaps not his best but certainly worth a visit. Kate Bush thought so anyway!

Based on the 1948 Michael Powell and Emeric Pressburger film which itself was based upon the Hans Christian Andersen fairy tale The Red Shoes is a story of obsession.

Vicky is an aspiring ballet dancer whose leap forward from the back row to that of prima ballerina catches the eye of Boris, the ruthless but charismatic impresario of the Ballet Lermontov.

Julian writes a new ballet for Vicky called "The Red Shoes" which is a big hit. Only the obsession with which her character wears the ill-fated red shoes in the ballet seems to be bleeding into real life too. An obsession that will have fatal consequences.

As the story itself is about a ballet dancer inevitably the work has a lot more ballet in it than a contemporary dance show. And this is perhaps it's only weakness. Most of Bourne's works play with subverting traditional ballet clichés and his dance moves are often innovative and witty. Here however his feet are rather tied. As The Red Shoes is about ballet it really does have to contain a lot of traditional ballet in it.

Luckily when the action moves from Monte Carlo to London's East End the humour of the piece is more apparent but despite the auteur's masterly attempts it never reaches the giddy heights of say The Car Man, Swan Lake or Edward Scissorhands.

Good try. Worth a visit.
Posted by overyourhead at Monday, December 12, 2016