Six years ago Stuart and I were lucky enough to see Debbie Reynolds perform live on the London stage. She was fantastic. This is what I wrote about it at the time. 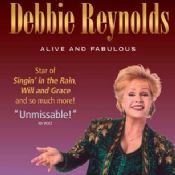 All in all Debbie Reynolds is a non-stop all-round old-school entertainer. Real show-biz, with all the razzmatazz of Hollywood. She obviously never wants to leave the stage. Always wanting to be in the spot-light. But it's a spot-light that casts a very long shadow. And I can't imagine how tough it must be having to walk in that shadow all your life (yes, I looking at you Carrie Fisher).
Posted by overyourhead at Thursday, December 29, 2016