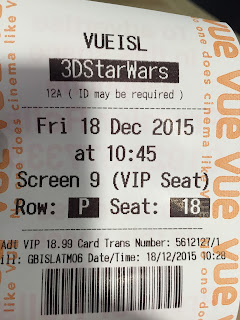 This morning I went to see Star Wars: The Force Awakens at the Vue Cinema in glitzy Angel Islington.

Wow! It was fab. At least as good as the original A New Hope film. Funny, exciting, melodramatic, silly, epic, full of plot holes, brilliant, thrilling and engrossing. We now have a 4th Star Wars film, people.

New characters Rey and Finn were great. A Stormtrooper deserter who just bluffs his way through the plot is a great idea. He's basically a dustman... who saves the galaxy!

Plot-wise if you turn it on its head it's basically the story of ISIS. There's a bombing campaign by a foreign power. There's the radicalization of the local population by an ancient religion to commit terrorist acts. They blow stuff up. Basically Rey is Syrian and Finn is ISIS. And Ben Solo is Tony Blair!

Great film though. Roll on Rogue One and Episodes VIII and IX.
Update: Just just seen the film again. I spotted Simon Pegg in it this time (with old man make up). I wonder if the grave at the end next to Luke is Luke's wife / Rey's mother?
And it did look like Han Solo was forcing his son's hand on the lightsabre to kill himself. So Han Solo commited suicide then? Ben Solo says he wants to be released from the conflict between light and dark. So Han says "I can help you..." 1st time I watched it when they struggle I thought Han was trying to force Ben's lightsabre *away* from himself. But 2nd time it's obvious he's pulling it *towards* himself. And after he manages it and kills himself Ben touches Han's cheek and says "Thank you".

Posted by overyourhead at Friday, December 18, 2015