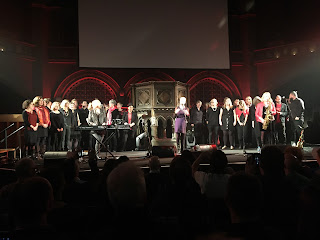 After a brief introduction by Hazel we all got to watch the film itself, join in a Q&A (all the songs were written for the film apart from Will You which she had written before apparently) and then an hour long gig showcasing songs from the film and more. A lovely surprise was a 50 strong choir that joined Hazel and her band for the final few numbers. Wonderful stuff.

The full gig list was:
Give Me an Inch
Big Brother
Calls the Tune
Blackman
If Only
Monsters in Disguise
Come Into the Air
Who Needs It
Will You (with the full sax solo)
Writing on the Wall
I Give You My Sunshine
Top of the Wheel
Eighth Day
Going Home
Chasing Cars (Snow Patrol cover)

Posted by overyourhead at Monday, December 07, 2015