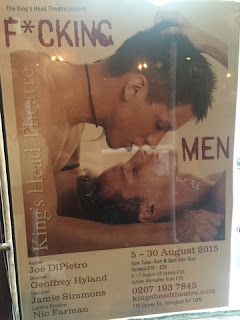 Last night Roger and I went to the Kings Head Theatre in Jeremy Corbyn's glitzy Upper Street to see a gay play called F***king Men. Actually I think it was called Fucking Men but the posters were being a little coy.

Stuart, Mark, Hudd and I went to see the same play in the same venue over six years ago and it was just as good as I remember it.

This is an American story of hunger and desire introducing us to the (sex)lives of ten gay men who were all related to each other by sex. It is a loose adaptation of the 19th century play La Ronde in which pairings of characters are featured in scenes preceding and succeeding sexual encounters.

The play was packed with dramatic irony, sexy, mildly titillating, sweet, mildly insightful, risque but never coarse. Oh, and very funny. The mainly gay audience seemed to find themselves reflected up on the stage in numerous scenes.

Actually it was nice to go see a gay play which a) is funny, and b) no body died. The characters weren't punished for having sex.

If you like your plays off-West End and off colour then this is the one for you.
Posted by overyourhead at Thursday, August 13, 2015