The Merchant of Venice... 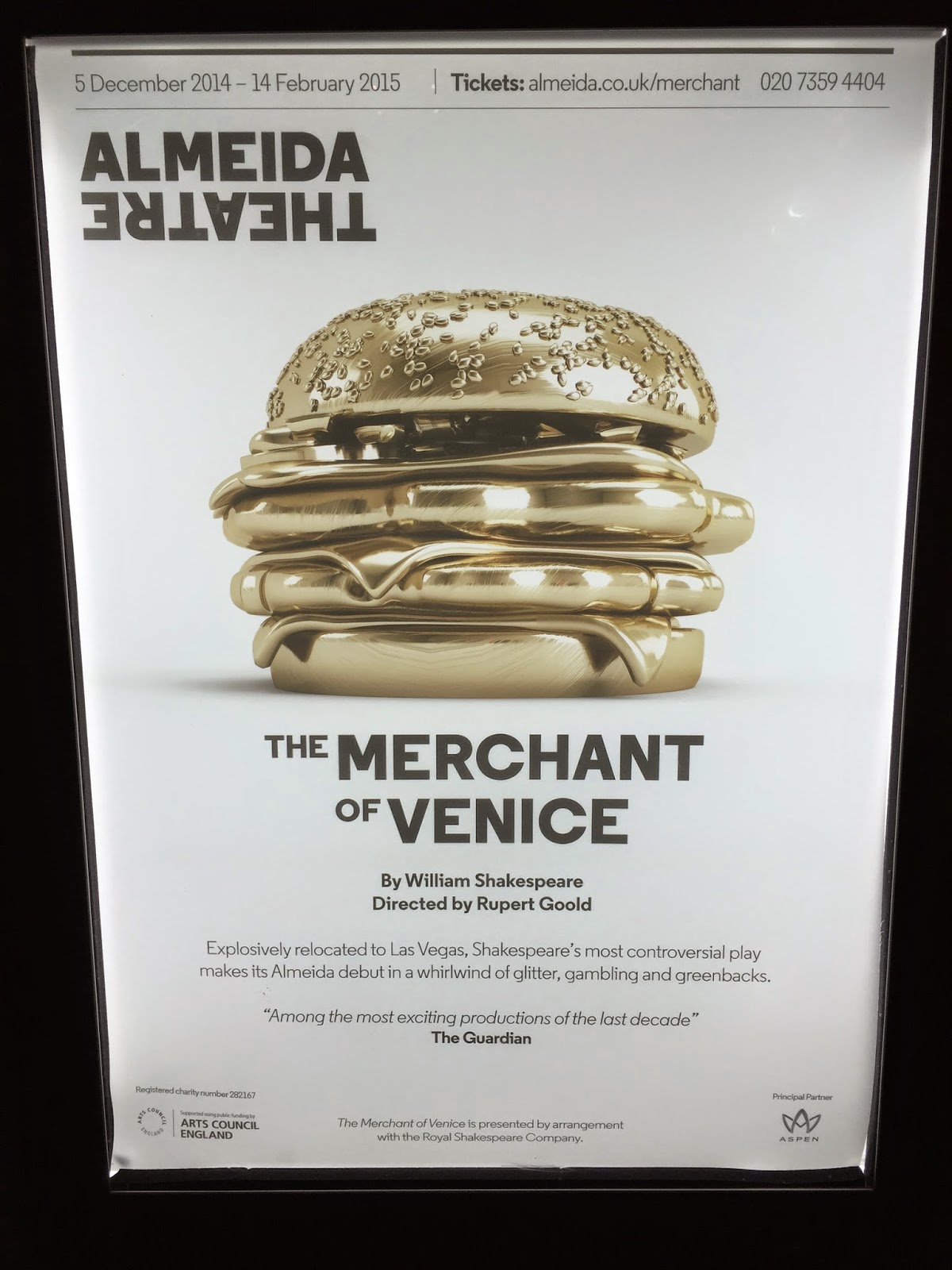 Last night Stuart and I went to see Rupert Gould's production of The Merchant of Venice at the Almeida Theatre in London's glitzy Islington.

Set in a modern day Venetian-style Las Vegas casino complete with full-on Elvis impersonator, dancing girls, Southern-style accents and seasoned gamblers we were treated to a feast of song, dance and antisemitism. It was a brightly coloured free-cocktails-for-the-gamblers sort of night of delight, disgust and degradation.

We had been warned "that cap guns, herbal and e-cigarettes will be used in this performance." Well, that didn't even register in this high octane retelling of how the titular merchant Antonio (Scott Handy) falls foul of the Jewish moneylender Shylock (Ian McDiarmid).

Antisemitism is rife in our Las Vegas and Skylock - who has been treated and insulted terribly - defends himself and his religion not least with his powerful "Hath Not a Jew eyes?" speech.

Antonio borrows some money from Shylock to lend to his friend the valiant Bassanio (Tom Weston-Jones) so he in turn could woe fair air-head Portia (the outstanding Susannah Fielding). The woing goes well - via a hilarious reality game-show Destiny - but when the money needs to be paid back to Skylock Antonio falls short and the bond of a pound of flesh needs to be paid.

When the case comes to court Portia takes on the defense of her new husband's friend complete with Legally Blonde pink fluffy pen. Dressed as a man she delivers the famous and deeply moving speech about the quality of mercy to try and dissuade Shylock from his gruesome demand.

The quality of mercy is not strain'd,
It droppeth as the gentle rain from heaven
Upon the place beneath: it is twice blest;
It blesseth him that gives and him that takes.

But all is to no affect and the knives are sharpened - on both sides.

Last minute all is resolved in a rather distasteful way on a quibble with Skylock then sloping off utterly defeated and spat on and the lovers now mistrusting each other for their disguises and betrayals.

Suspicious Minds plays us out in the end.

Posted by overyourhead at Wednesday, December 17, 2014