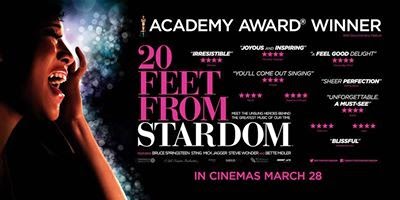 Last Friday Stuart﻿ and I went to the Hackney Picturehouse to see the Oscar-winning documentary 20 Feet From Stardom.

A joyous film it celebrated the life of the backing singer - often women, often black - who sung on all the hits and all the tours you could imagine. Criminally overlooked these people could sing, could dance and knew how to work as a team. Not all of these artist wanted to be stars in their own right - some like Lisa Fischer - were happy with their lot. But the film highlighted a few that had tried to break the mould and step into the limelight but for a number of reasons had failed. Darlene Love, Merry Clayton, Judith Hill had tried (and still are trying) to make it big but a mixture of controlling producers, bad luck, poor material and mismanagement are holding them back.

As Bruce Springsteen said, "those 20 feet from beside the drum kit to the front of the stage can be a long walk."

Following the screening we were treated to a Q&A with one of the films stars - Judith Hill. Gosh, she can belt them out.