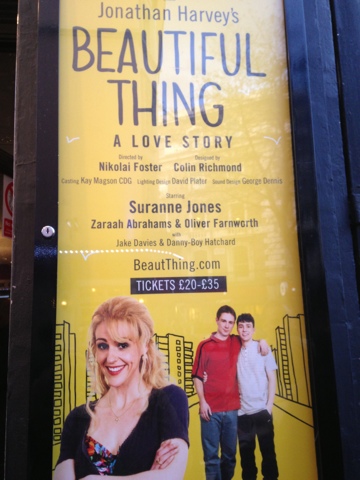 Last Friday night Stu, I, Andy, Kev, Andy and Tim all went to see the twentieth anniversary revival of Beautiful Thing at the Arts Theatre in London's glitzy West End.

Suranne Jones was great as overbearing mother Sandra. The two male leads, Jake Davies and Danny-Boy Hatchard, were super as the star-crossed lovers Jamie and Ste. Zaraah Abrahams was also good as Mama Cass obsessed  Leah. And Oliver Farnworth played impossibly handsome Tony to the distraction of also everything else on stage!

At it's heart a gay fairytale, 20 years on it's still funny, poignant and has the power to shock and delight.