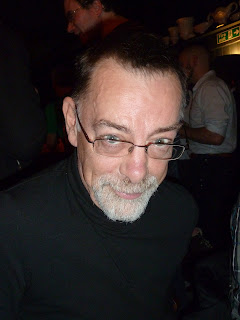 Ian Martin's funeral yesterday went well. We had between 40 and 50 people at the East London Crematorium which was a good turn-out.

We all congregated outside for a while in the glorious sunshine and in doing so finally got to meet Ian's great friends Jane and Paul. Jane had done much of the arrangements for the funeral and had given Andy and I much of the info needed to register Ian's death and gain the death certificate last week.

David C had created a marvellous order of service for us and he, David S and Andy R were all pall-bearers.

The music we walked in to the crematorium was ELO Mr Blue Sky.

Jane spoke first. It was very moving and really quite illuminating. Ian had moved around, lived in various countries and lead a fairly colourful life before we had all met him. She described Ian as the brother she never had which was particularly poignant.

Then we heard Kirsty MacColl's Days.

Edward Roussel of The Daily Telegraph spoke next. He has glowing things to say about Ian's time there. He seemed to be the ne  that brought the Telegraph into the digital age.

Then we heard Abba's The Way Old Friends Do.

I then gave a short eulogy of some personal recollections of my time knowing Ian. Hopeful I didn't guild the lily too much. I'll post it later.

I then thanked a few of the people who had helped make the funeral happen and gave a final farewell to Ian before pushing the button to close the curtains.

After the funeral Jan had arranged cars for us all to go to The Royal Oak in Columbia Road. I'd spoken to the landlady Naomi there last week and had arranged for them to open up especially for us for the day and they layed on a beautiful spread for us. Emma and Johnny behind the bar were fantastic.

About 30 people turned up and we ate, drank, toasted and reminisced about Ian for about six or seven hours. As the evening approached people drifted (and in some cases staggered) off back to their own lives.

David C, David S, Andy and I promised that we would go up and see Jane and Paul in August at the Rectory that they owned with Ian once we have Ian's ashes to scatter.

And in November, around Ian's birthday, we are thinking of planning a memorial which we hope will include some of Ian photography called Blooms & Bangs. More later.

Posted by overyourhead at Wednesday, June 20, 2012