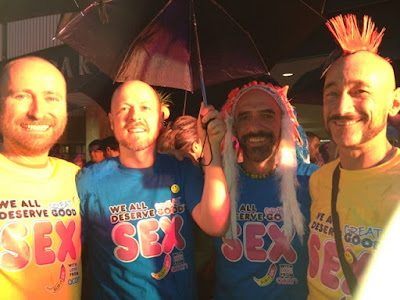 Last Saturday was Sydney Gay & Lesbian Mardi Gras. Having arrived in Sydney with no intention of either watching the parade or going to the main party we ended up doing both. Easily persuaded us.

It had been raining all week and on the day itself it positively chucked it down. Being sensible Brits both Stu and I had bought umbrellas but even they were no match for the Sydney weather. Happy Muddy Gras indeed.

Along with David and Andrew we'd signed up to march on the Aids Coalition of New South Wales walking float. Or Acon as it's known. Yeah, I know, makes us Acon Antiques.

Having been required to sign in early we then had to wait for two and half hours in the rain for our slot to come around on the march which was a bit of a drag. Waiting for such a long time to spontaneously shout, dance and generally behave like a idiot itself seemed rather idiotic. Still, when our turn came we turned on our provided flashy disco swords and gave it all we could for the waiting crowds and cameras.

We'd heard that there as a Kylie float somewhere about too but we must have missed it. Apparently is was small and largely wooden... rather like the good lady herself then. ('Arf, 'arf. )

The parade was great fun but over all too quickly. Within 30 minutes we walked the route, got drenched in the process, smiled at thousands of cameras and reached the rather anticlimactic end. By that point the gay pride march had turned into the gay shame shuffle. In a dark damp field.

So with loads of time on our hands we turned on our muddy heels and walked back to the boys' apartment to eat, drink coffee and general get ourselves in a party mood.

Stu and I had pretty much decided that we'd not bother with any of the main dance halls or headliner Kylie but would stick to the TGI Retro Hi-Fi Ballroom. The bill looked pretty good:-

Le Gateau Chocolate was fab but came across rather under-rehearsed at one of two points. RuPaul was fun, slick and seemingly running through every track from some new album. Edna died on her arse (Dead-Na?) initially with some people walking out, booing and trying to wave her off stage. He wasn't helped by the dreadful sound system which rendered much of his act inaudible. Once the wig came off though and he did what he did best i.e. sing the mood changed somewhat and he won people over. By the end he got a good cheer from the crowd. Horse Meat Disco were fab packing the dance floor. We danced out not so little bums off. When Lady Miss Kier eventually came on it was so dire we left.

All in all we had a great time and have to say that Sydney Mardi Gras was a lot of fun. Now if only they can get round to reinserting the words "Gay & Lesbian" back into it's name...
Posted by overyourhead at Monday, March 05, 2012