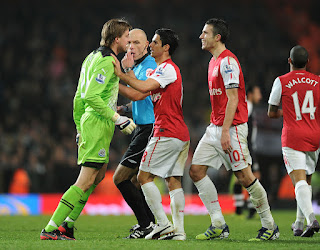 Mark and I were at the Emirates Stadium last night watching the mighty Arsenal FC take on Newcastle FC.

Their keeper Tim Krul was wasting time all the way through the game so it was very pleasing to see 5 minutes added on which gave us a few more chances to nick it.


It was thrilling end with Thomas Vermaelen scoring a 95th-minute winner to seal the game. That now takes us within a point of third-placed Tottenham.


It's been an exciting few weeks in the world of Arsenal with a series of wins seeing us rise up the table while Spurs has had a corresponding series of loses. Let's hope we can maintain our run of good play!