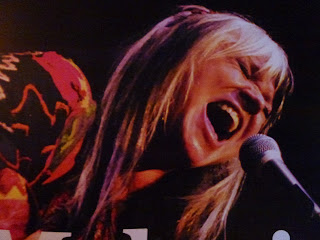 Last Friday I took Stuart to see one of this favourites as a birthday present. We went to see Melanie (yes, her of 'Brand New Key' fame) at the Union Chapel in London's glitzy Islington.

As Stu said as we were waiting for the show to start, "Loving the pensioners, tie-dye and Joni Mitchell mash ups playing through the PA!" We were the youngest people there. By far.

Folk fans can be a bit weird, can't they? Ageing floral shirts on the men, flowing flowery dresses on the women, an over familiar demeanour, clusters of extended families that are all just a little too close and a distinct look of being unwashed. We were in for a 'fun' night, right?

Well, actually we were. Melanie and her son - playing guitar and a number of other weirder stringed instruments at her side - were really quite charming. The anecdotes and stories were perhaps a little too rehearsed at times but she did make us laugh. Her songs were all pretty cool too. The voice is still pretty much intact and you could hear every words as clear as a bell. Although as Stu mentioned she has lost her mid-range somewhat. 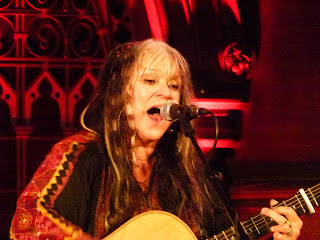 Large parts of the set were given over to we the audience to shout out what songs we wanted her to perform. This she duly did - I imagined her saying, "I'm not some bloody folksy jukebox you know!" But she didn't of course. She was very sweet.

As the song suggestions dried up I shouted out "Combine-harvester!" (referencing the Scrumpy and Western act The Wurzels who covered Brand New Key in 1976) which got a snigger or two. Still, we got all the hits and more by the end so we were very happy.

So that's another one off Stu's "bands-to-see-before-they-peg-it" list then.