Julie Andrews: The Gift Of Music... 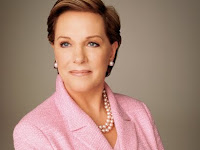 Stu, Faye, Andy and I went to see Julie Andrews at the O2 Arena last Saturday in her show The Gift Of Music. Boy, what a let down.

She barely sang all night. She had warned, “I don’t sing the way I used to, so I’m doing everything I can to put the word out that they shouldn’t expect that.” Well, Julie m'darlin' you didn't put the word out enough.

Her first time on the London stage in 30 years, she entered to a standing ovation with The Sound Of Music being screened in the background. Our hopes were high but we should have cottoned on that she wasn't actually singing as she came on stage. And things got worse.

In the first half she was joined on stage by the five beaming vocalists who performed hit songs from Rogers and Hammerstein musicals as Dame Julie mainly just looked on. Dame Julie completed only a handful of numbers on her own, disappeared from the stage for large chunks of the show, and the whole of the second half consisted of her reading aloud from a children's book she co-wrote with her daughter - the dreary Simeon's Gift. We sniggered throughout.

Twelve years ago it was feared Dame Julie would never sing again. She had entered hospital in June 1997 for the removal of a non-cancerous polyp on her vocal chords, but what should have been a simple surgical procedure went dreadfully awry and robbed her of her perfectly pitched singing voice. Devastated and trying to cope with the fact that her four-octave singing voice was destroyed, she underwent grief therapy at Sierra Tucson, an Arizona rehabilitation clinic noted for treating celebrity clients. Since then, with the support of her husband Blake Edwards and her family, and helped by a malpractice lawsuit she filed against the surgeons that was settled in 2000 for an estimated £20 million, she has come to terms with her loss and developed a new singing style. “I hope I’ll have a few surprises up my sleeve for the concert, but basically I have about five good bass notes and I can work my way around them pretty well,” she said. “I also employ that Rex Harrison sing-speak kind of voice. I narrate a lot, I tell tales, I show a great deal of footage, and I’ll be with the London Philharmonic Orchestra and will be helped by five Broadway entertainers.”

So there we have it. A rather pointless show which produced a rather disaffected audience - many of whom walked out in disgust. Oh, did I mention it was £106 a ticket? Shameful.

(See Debbie Reynolds for how to put on a great show if you're voice isn't quite what it was.)
Posted by overyourhead at Monday, May 10, 2010