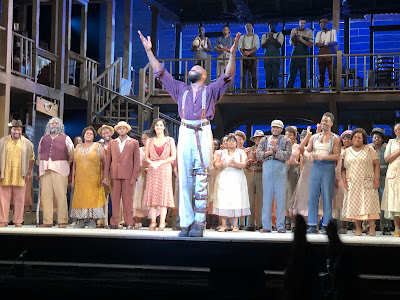 Last Friday night Paul, Stuart and I went to see Porgy and Bess at the London Coliseum in London's glitzy West End.

Billed as The Gershwins' Porgy and Bess (although adapted by DuBose Heyward from his and Dorothy Heyward's play) the show is set in 1920s South Carolina and tells the story of Porgy, a disabled black street-beggar living in the slums of Charleston. It deals with his attempts to rescue Bess from the clutches of Crown, her violent and possessive lover, and Sportin' Life, her drug dealer. Can Bess's love for Porgy could save her from a dark past, or do old habits die hard?

Written in 1935 from the outset, the opera's depiction of African-Americans attracted controversy. Problems with the racial aspects of the opera continue to this day. Indeed several of the members of the original cast stated that they had concerns that their characters might play into a stereotype that African Americans lived in poverty, took drugs and solved their problems with their fists. 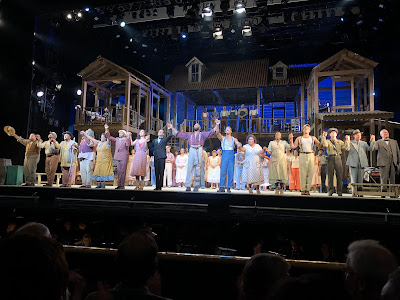 The belief that Porgy and Bess was racist gained strength during the Civil Rights Movement and Black Power movement of the 1950s, 1960s and 1970s. As these movements advanced, Porgy and Bess was seen as more and more out of date. When the play was revived in the 1960s, social critic and African-American educator Harold Cruse called it, "The most incongruous, contradictory cultural symbol ever created in the Western World."

Perhaps unsurprisingly Gershwin's all-black opera was also unpopular with some celebrated black artists. Harry Belafonte declined to play Porgy in the late 1950s film version, so the role went to Sidney Poitier. Betty Allen, president of The Harlem School of the Arts, admittedly loathed the piece, and Grace Bumbry, who excelled in the 1985 Metropolitan Opera production as Bess, made the often cited statement, "I thought it beneath me, I felt I had worked far too hard, that we had come far too far to have to retrogress to 1935. My way of dealing with it was to see that it was really a piece of Americana, of American history, whether we liked it or not. Whether I sing it or not, it was still going to be there." 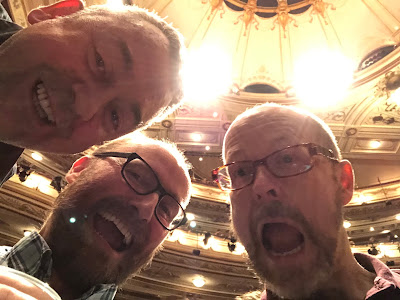 Over time, however, the opera has gained acceptance from the opera community and some (though not all) in the African-American community. Maurice Peress stated in 2004 that "Porgy and Bess belongs as much to the black singer-actors who bring it to life as it does to the Heywards and the Gershwins." Indeed, Ira Gershwin stipulated that only blacks be allowed to play the lead roles when the opera was performed in the United States, launching the careers of several prominent opera singers.

Politics aside, the ENO performance was very good if somewhat stylised. For the most of the three-hour performance the 60-strong cast members were on stage. That said, both baddies - Nmon Ford’s Crown and Frederick Ballentine’s Sporting Life - were played as lively and three-dimensional villains. Our hero and heroine were solidly performed too. Nicole Cabell's Bess perhaps lacking some of the vocal power that Eric Greene's Porgy displayed however.

The biggest hits from the show are probably Summertime, I Got Plenty o' Nuttin, It Ain't Necessarily So and I Loves You, Porgy. The first of these, Summertime, opened the show and as soon as Nadine Benjamin launched into her sweet rendition, we knew we were in safe hands.

A solid production of a solid show.

Posted by overyourhead at Tuesday, October 23, 2018