They were all given a dove for Afghanistan Peace Day - so why didn't he just ask for a live one?

Amidst power cuts, strikes and boot-boy aggro on the football terraces, Joe is bored of a life that’s going nowhere. Enter hair-dresser Jane. Blonde, brassy, and moving to the beat of a whole new world of sound, movement and all-nighter dancing at The Wigan Casino - the home of Northern Soul. Yay! SoulBoy is coming soon.

Out and About with Mam and Anne...

Lovely to see Paul's mam and our Anne last night. Drinks at The Trafalgar Hotel (hello Johnny Vegas) and then down on the river. More pix here. 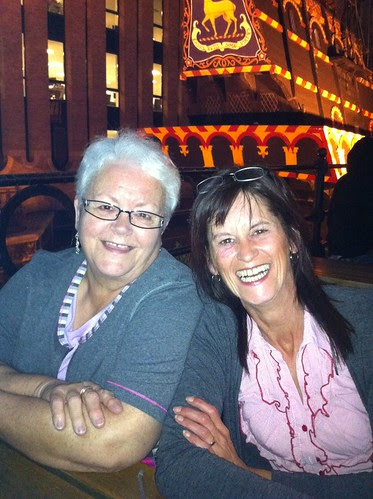 Straight US Army combat solders in Iraq make a fun video showing how they don't mind gays in the military. And love the comment at the end, "I just showered, man. I'm not into all this gay stuff." Big ups.

Virgin has announced that it is launching its own web-based video on demand service called Virgin Media Player. Coming soon... http://www.virginmedia.com/player
If you're a Virgin XL TV customer, who also has a broadband package with the company, then you'll be able to access the service first. Initially ITV, Living, Disney, Cartoon Network, National Geographic, MTV, Comedy Central and Nickelodeon.

We went to the Barbican to see The Surreal House exhibit last week. It is great fun. Some lovely pieces and really well put together. 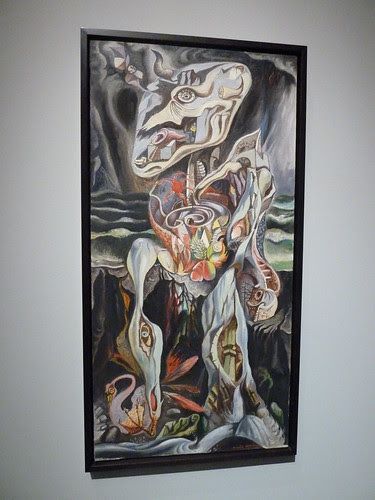 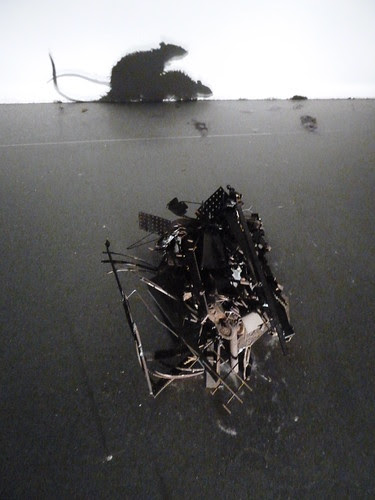 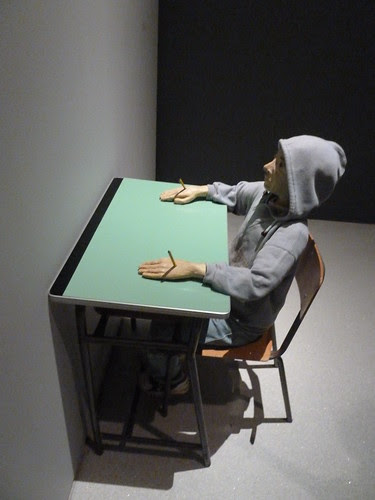 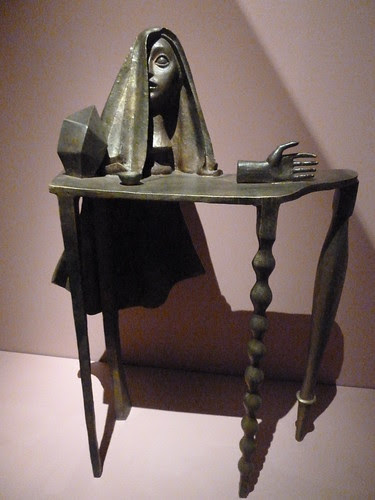 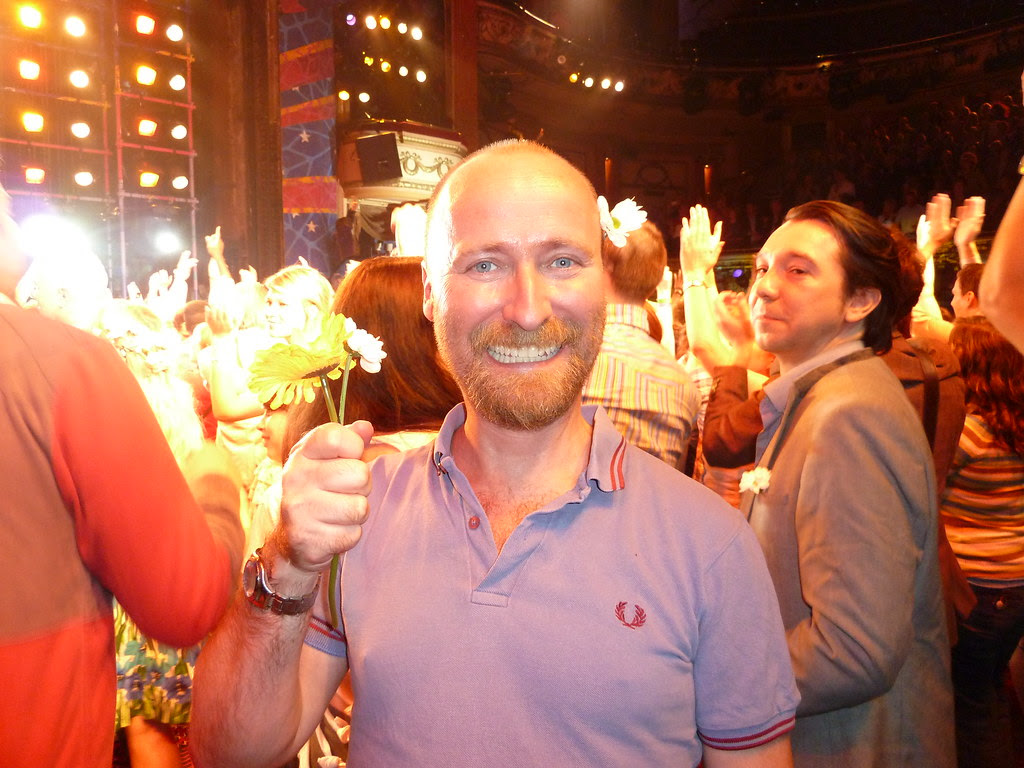 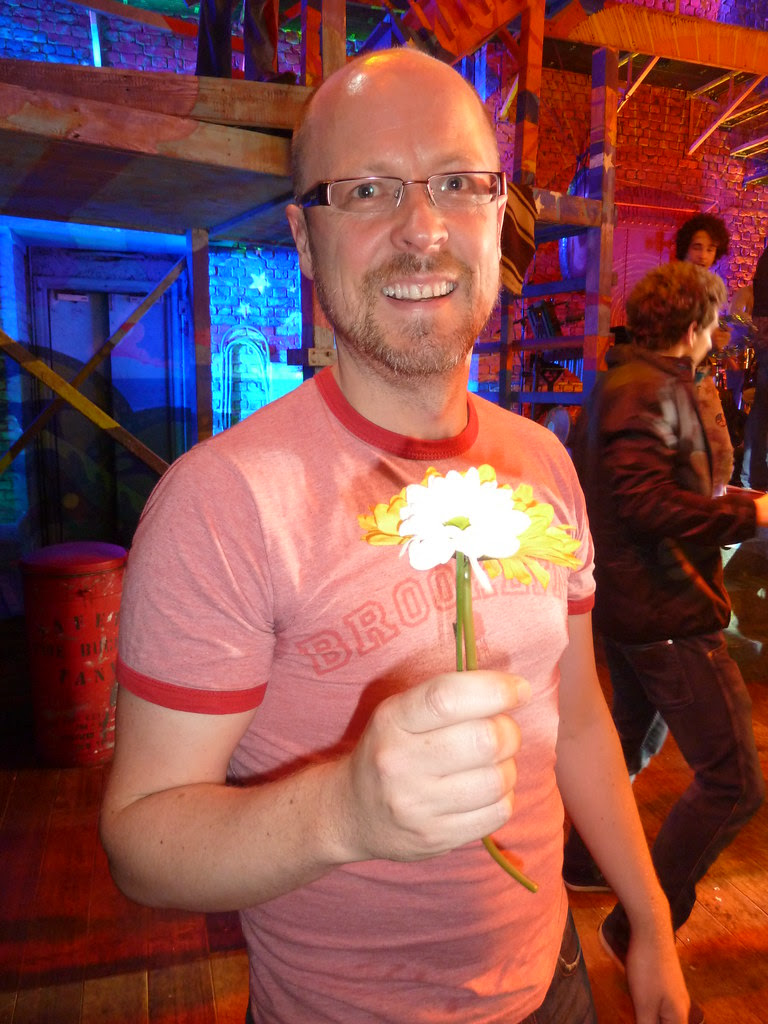 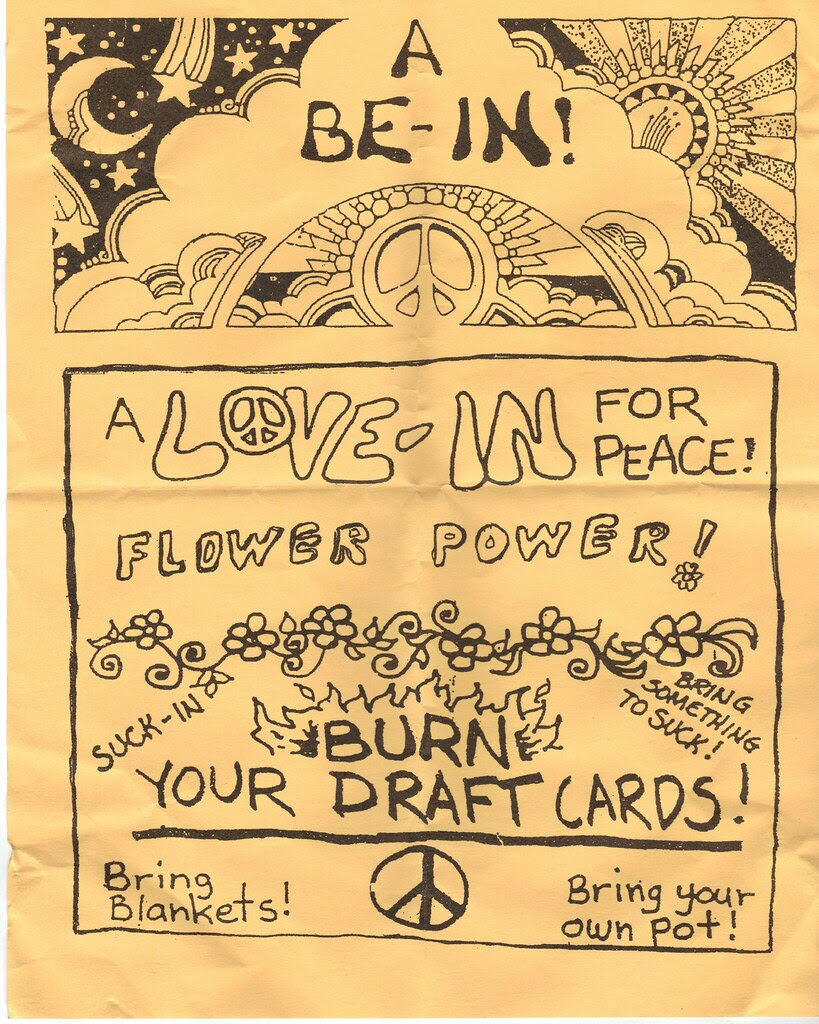 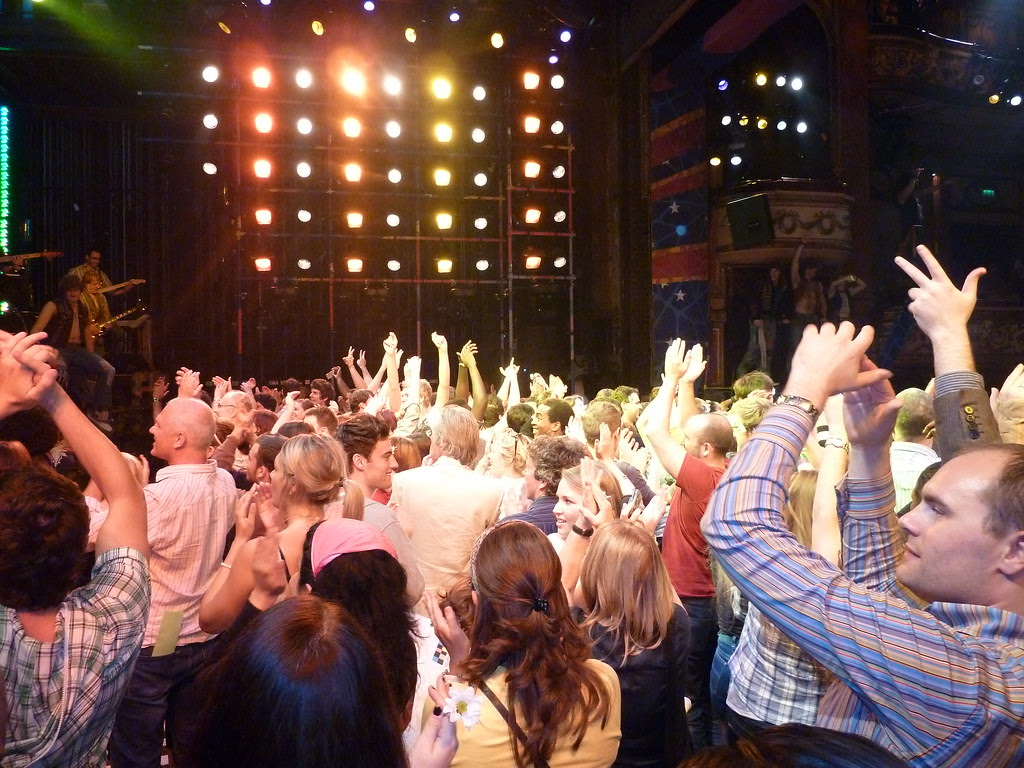 Stop me if you've heard this one before.... No really.

The first proper date Stu and I went on was to see a revival of the 1967 hippy musical Hair at the Gate Theatre in 2005. Twelve years earlier than that coincidentally we'd both seen the same 1993 production at The Old Vic starring Sinitta and John Barrowman.

We are both big fans.

So naturally we went to see the Broadway revival at the Gielgud Theatre with the original New York cast four months ago.

We enjoyed it so much we just couldn't keep away so last month we went again.

And guess what? We still couldn't keep away. So we went yet again a few weeks ago.

And, surprise, surprise, we went again last night too. This time with Paul. We had great seats - front row centre. Very 'in your face'.

It's still at the Gieldgud Theatre and still with the original New York cast.

Hair is undoubtabably a great musical. A great rock musical no less. The first of its kind. It explores dramatic themes throughout, most of which are displayed right there on stage; swearing, drug use, overt sexuality, anti-war, anti-racism and nudity. What's not to like?

This production really does the material justice. It is active, energetic and enthusiastic. Simply staged it allows the great singing to come to the fore. Last night the audience were involved from start to finish being encouraged to join in as the action on the stage bled into the auitorium. Climbing over the seating the cast sang, danced, handed out posters and passed round flowers. By the finale the audience were so involved they flooded onto the stage to join in the fun. Naturally we just had to join them (yet again).

We probably liked it more the third time of viewing than the forth time to be honest - but that was probably because row C or row D is preferable to row AA to enjoy the whole panoramic spectacle.

I wonder if we can sneak in a fifth time before it closes on 4th Sept? Tee, hee.

After Birmingham we headed up to Wolverhampton for a reunion with Stu's University of Wolverhampton mates. We had a great day and night together. The guys relived their old haunts and we hit the town with snakebite and blacks. Very studenty. 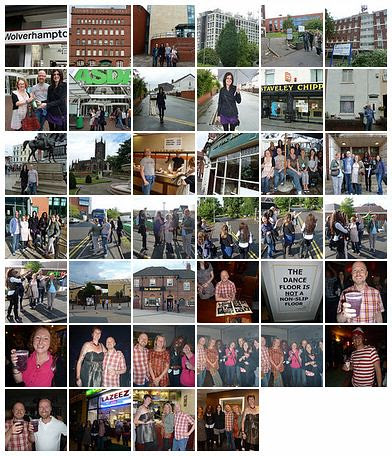 Stu took me up to Birmingham on Friday for the night. We met up with his chum Os and hit the town. Running. More snaps here. 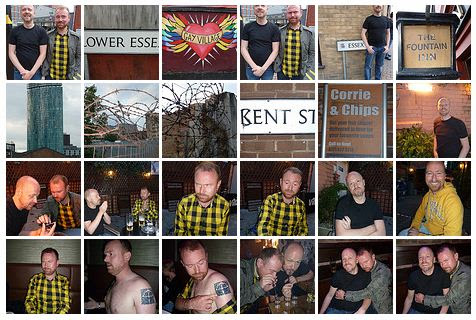 Email ThisBlogThis!Share to TwitterShare to FacebookShare to Pinterest
Labels: Birmingham

The Kitchen Of The Future...

Last night Stu and I went to the Barbican to listen to a debate organised by IKEA on their new report on what the future kitchen will be like in thirty years time. The report was based upon new research carried out by the retailer into consumers' "must-have" features in their 2040 kitchen. No big surprise in the the results which basically reveal that the room will remain the hub of the family. But householders in the UK and Ireland also say they want a kitchen with built-in energy efficiency that is inherently a "green" space in which the garden and kitchen merge, allowing food to be grown in both areas. Consumers also say they want reclaimed and recycled materials as standard for their kitchen products. It was interesting stuff.

And of course nice to have the free booze, free nibbles and a free goody-bag or two.

Also nice to have free entry into the Surreal House exhibition.

We fell into conversation with a couple of people at the event - the lovely Jane out of JanesLondon and another lovely lady Mary who lived in the Barbican itself.

We ended up back at Mary's for more drinks and chats. Great fun. 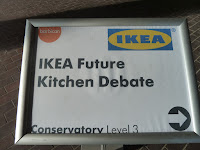 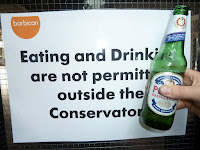 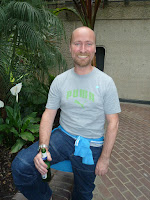 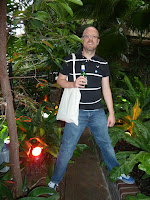 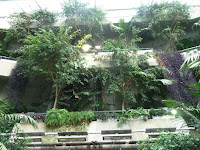 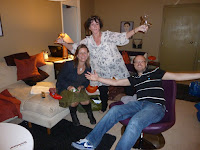 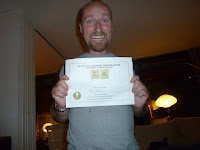 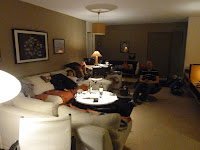 All UK broadcasters and most content owners are now pretty much convinced that the internet offers a technically viable means to distribute content to consumers. For some, but not all, it will be commercially viable too. But will it be limited to just the internet? The answer is definitely “no”.

Project Kangaroo, the joint venture between BBC Worldwide, ITV and Channel 4, wanted to offer its online platform for archive rights to the likes of the Freesat digital-satellite service. The Competition Commission reviewed the Kangaroo proposition after a flurry of complaints and announced it was a no-go. The technology was then sold and has been relaunched earlier this year as Seesaw. A small player at the moment but nothing a big advertising push couldn't solve.

Project Canvas is particularly interesting as it would see the UK public-service broadcasters create an open platform to offer video-on-demand over IP using the “open” internet to the television set. For the first time, it will give the PSBs a digital platform they can truly own, but it also raises some competition concerns, which must first be overcome to avoid Canvas drawing a blank. Virgin Media aren't too happy about Canvas as they would have no control over the branding - so they have lodged a complaint to Ofcom. Sky are yet to respond. Watch this space.

Finally we have Project Darwin which is BSkyB’s initiative to connect its high-end set-top boxes to the internet. It wants to use the open internet to do this next year rather than investing heavily in a managed IPTV network. It’s a smart move, as Sky needs a comprehensive on-demand service to compete in the connected world. It’s likely to use “progressive downloading”, where the content starts downloading to the hard disk of its digital-video recorders before playing on screen to ensure that quality of service can be (virtually) guaranteed.

There is a lot at stake so don’t be fooled by the silly project names. Online TV distribution is starting to define the next phase of the broadcasting industry.

We had a fantastic time at Brighton Pride (or to be more exact Brighton and Hove Pride) over the weekend. Great to see everyone. Lots of drinking, eating and dancing. We've booked for next year already! 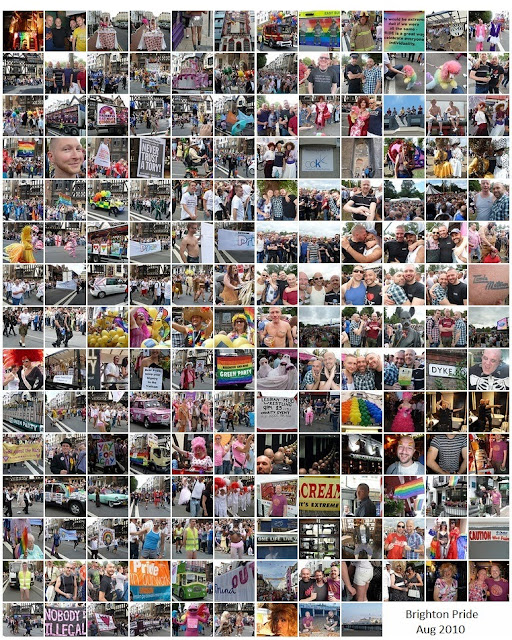 Darren and I took part in a flash mob at Brighton Pride to the sounds of Don't Stop Believin', I Gotta Feeling, California Gurls and Just Dance. It was all choreographed by a secret YouTube link. Times and places on FB. Can you spot us in the mayhem? Probably not! Great fun.

What BP Could Buy...

Email ThisBlogThis!Share to TwitterShare to FacebookShare to Pinterest
Labels: BP

Project Morrinho is an ever-growing social project that takes the form of a miniature city built by young people in Rio de Janeiro from brick, paint and other found materials inspired by the landscape, architecture and everyday life of the favelas that span the city. Here it has appeared on the South Bank. More snaps here. 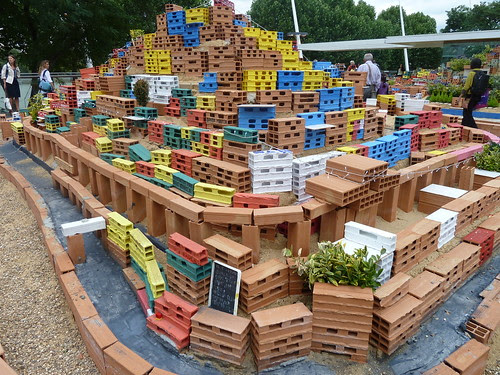 This have a maze this week in Trafalgar Square. Cool. More snaps here. 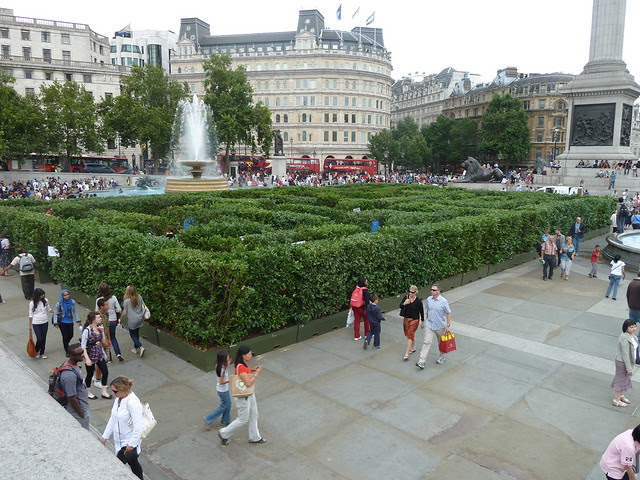 There's an app on the iPhone called Talking Carl that repeats everything you say but in a higher pitch. Now what would happen if two of these apps could hear each other? FIGHT!

I Love You Phillip Morris...

Image via Wikipedia
I love I Love You Phillip Morris and shall be queuing up to buy the Blu-Ray as it's out today.

It's had a checked past though. Released in Europe earlier this year it was moderately successful and has easily covered it's $15m production costs.

However there's still been no US release yet. Why could that be? Jim Carrey is a big star. Huge. As is Ewan McGreggor. And it's a comedy. A funny one at that. And it's proven that people will do and see it with it's European release.

Could it really be the legal wranglings of it's distributors, Consolidated Pictures Group that have caused the delay?

Or, as I suspect, it is because the film’s about a Christian man turning off the path and finding his salvation not in Jesus but in Phillip Morris’ arse.