Yesterday Paul and I went to Wembley Stadium to watch the mighty Arsenal take on Birmingham City in the Carling Cup Final. We played OK I suppose but they just wanted it more. A calamitous Arsenal defensive mix-up two minutes from time meant that they sneaked a win. Pah! 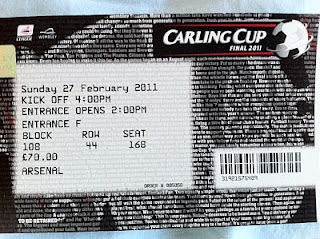 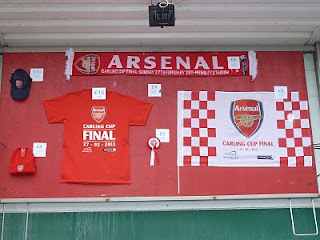 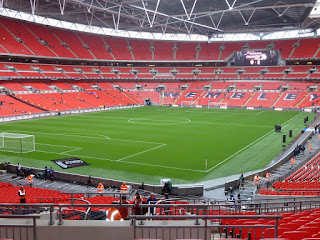 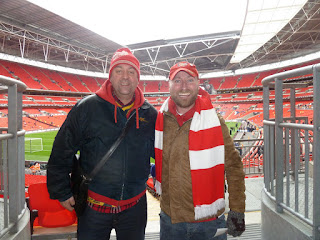 Last night I went along to the launch of the Living London project web site at Islington Town Hall.

Living London is a groundbreaking oral history project which examines the history of housing and policing for lesbian, gay, bisexual and trans (LGBT) people in London over the last twenty-five years – viewed thorough two community organisations: Stonewall Housing and Galop (in partnership with LGBT History Month). The project is funded by the Heritage Lottery Fund.

The site contains oral histories - many in full - flyers, posters and documents all relating to LGBT events since the early 1980s. There is a fascianting timeline of gay history over the past 25 years.

And the lovely Matt Cook was giving a talk too (so what's not to like?)

Paul and I went to the game last night as usual. We were playing Stoke at home. We didn't play the best game ever and what with Theo Walcott twisting his ankle so being out of the Cup Final on Sunday and Cesc Fabregas hurting his hamstring it wasn't a good night all in all. Except the result of course. Sebastien Squillaci popped it in the net after a nice cross from Nicklas Bendtner. We're now one point behind leaders Man U - who admittedly have a game in hand and slightly better goal difference.

The pantomime villain of the night was of course Ryan Shawcross. He got booed at every opportunity. On 27th February 2010 his attempted "tackle" broke both the tibia and fibula of Arsenal's Aaron Ramsey and resulted in a sending off. Immediately after the game the world and his wife rushed to Shawcross's defence - er, why? - saying "he's not that sort of player". Right. Yet those same people describe him as "a committed player". Like there's a difference between a committed tackle and a reckless tackle. Scum.

This Is England: The Musical...

A fantastic rap by Dan Bull summarising the film This Is England. 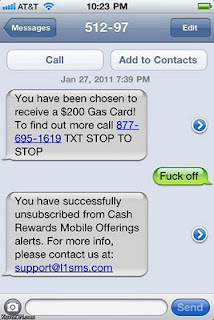 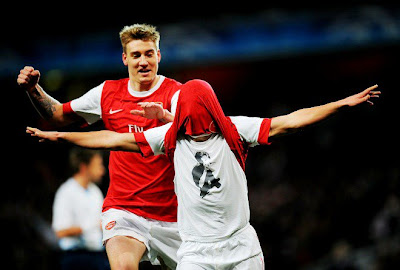 Last night Paul, Simon and I went to the match. It was the 1st leg of our Champions League against Barcelona FC - the 'best club in the world.' Ha. Or so they thought.

They had super-troupers in sky over the Emirates Stadium prior to kick-off. The club had really pulled out all the stops including red and white flags on every seat. The odds were against us. I was crossing everything (including the road).

It started well but we were soon outplayed. Villa scored and we were 1 - 0 down at half time. The bookies then lengthened the odds of our come-back to as much as 16-1. Things weren't looking good. Alex Song was making sterling efforts (and got booked for his trouble). Cesc Fabregas was excelling but getting closed down by their total football approach. And Lionel Messi was always threatening.

But towards the end of the second half, miracle upon miracle, it happened. Largely against the run of play came two goals - Robin Van Persie in the 78th minute and five minutes later from Andrey Arshavin. Wondrous goals both. So we pulled back from the misery of 1 nil down to the ecstasy of being 2-1 up. My flabber had never been to gasted. My heart was pounding for hours afterwards. I was beaming ear to ear.

Neat idea for a celebration after scoring against Barca. Audrey Arshavin has a shirt with himself on it.

Now we have to go to the Nou Camp and hold on for another 90 nail-biting minutes. I don't hold out much hope - but some!

Ever heard of LPSG? Well now you have. It's the Large Penis Support Group.

"While it is true that 1.5% of home accidents are caused by large penis related incidents, only a small number have ever been known to be fatal. A large penis is a friend as well as a foe. Treat it as such."

Only 1.5%? I would have thought it would have been larger (boom, boom).

"Large penises have long been considered fashionable." - How so? As a wrap or a scarf? Can you get them in different colours?

For the full larger details (if you dare) click here.

The schedule of events for the London 2012 Olympic Games has been released. You can register for tickets here which will be going on sale from 15th March. Skimming through the 600 odd events one that caught my eye was Beach Volleyball in Horse Guards Parade is just £20. 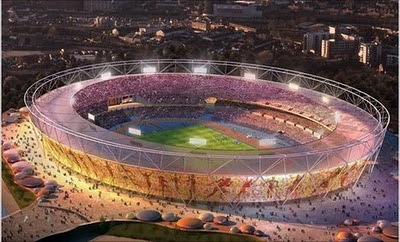 Here is something I did 5 years ago today which I thought bore reposting. How times have changed.

Last night Emma and I went out and committed some random acts of Valentine's Day terrorism. The way you do. Having both been shat on from a great height in the last year VD seemed a perfect time to vent some anger on men in general and get up to some mischief. The evening started gently enough in the Marriott Park Lane Hotel but we were soon to leave a trail of carnage across the West End; running into restaurants, laughing at mournful faced couples with nothing to say to each other sitting down for overpriced table-for-two set dinners, extinguishing candles with water-pistols, shouting "Down with love!" and "All men are c*nts!" God, we must have been right pains in the arse. But we did laugh. A lot. And drink. A lot.

Actually we probably laughed and drank a little too much come to think of it. We consumed five (yes, FIVE) bottles of champagne in various establishments. And I'm only just now beginning to remember some of the stuff we did. Through the fog a name comes to mind (Francis Johnson? Scottish RADA? Something about a show reel?). And a place we ended up (Bar Code was it?). And a late night phone call (oops! sorry!).

Mischief making to one side, it was actually amazingly good therapy for us both. Emma and I got all the anger out of systems, made some positive decisions and ended up very drunkenly celebrating love in all it's many forms.

Mapping stereotypes is a funny little project. It views the maps as if seen by Silvio Berlusconi (below), Gay Men (below that), Germans, USA etc. Excellent. 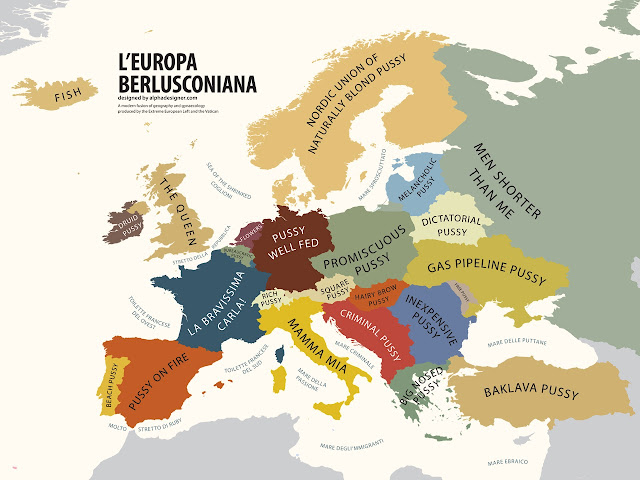 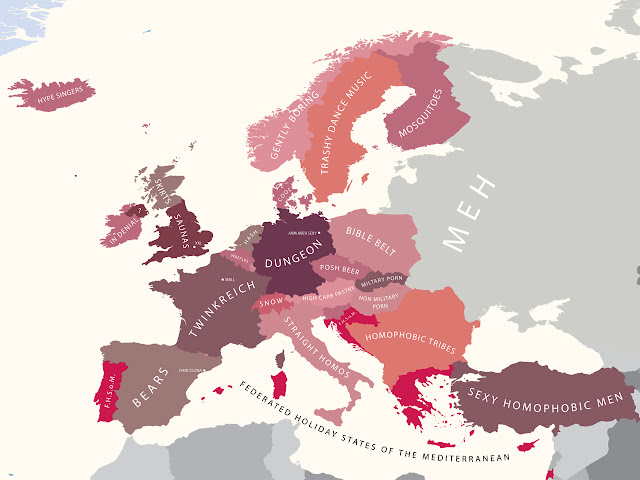 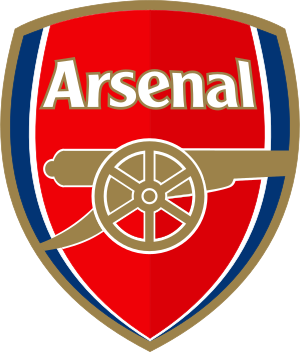 Image via Wikipedia
I have just joined the Arsenal Fanshare scheme. So I now own a bit - a very little bit - of Arsenal Holdings Plc. Arsenal Holdings Plc own Arsenal Football Club. I'm investing £50 a month - which after deducting 2% admin charge (£1) - that then puts £49 towards buying a Fanshare. Fanshare's are 1/100 of the price of a full share - currently £11,500 - so coming in at £115 each. That means every couple of months I'll be buying 1 Fanshare. At that rate in about 19 years I'd own 100 Fanshares and my membership status would be converted so that I'd receive a guaranteed place at the AGM and the full voting rights for one share, equivalent to being a shareholder. 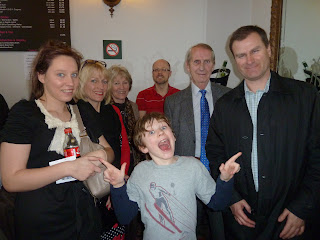 As a belated 80th birthday present last Sunday Myrtle treated Dad, Si, Angus, Jo, Charlie, Stu and me to a night out at the Royal Albert Hall to see Cirque Du Soleil: Totem. We went for dinner first at the Consort Cafe and then watched the show. It was the usual CdS fare - acrobats, music, wailing and the odd bit of misfired humour. It was nice to see everyone.

On Friday I went to have a look around the annual Kinetica Art Fair. It was the usual mix of the weird and wonderful. I especially liked the piece that included an airport departure board called "State Sponsored Homophobia" that highlighted pages and pages of world-wide destinations and instead of boarding/go to gate/cancelled type messages it had the punishments for being gay in those areas - flogging/3 years/stoning etc. 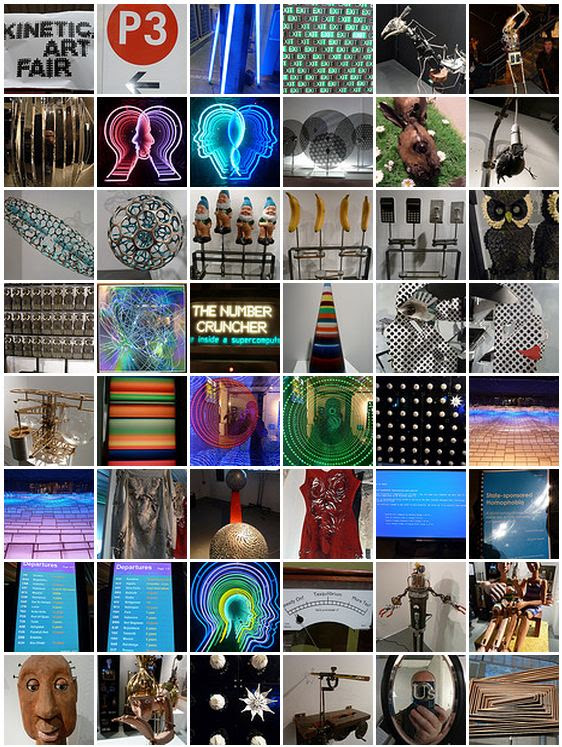 On Saturday afternoon Matty threw his 40th birthday party on the river. It was a fancy dress party with a theme of cartoon, fantasy, hero. Mark, Stu and I went as the three little pigs - and who first prize for best costume! Great fun. The Difference Between the UK, Great Britain, and England... 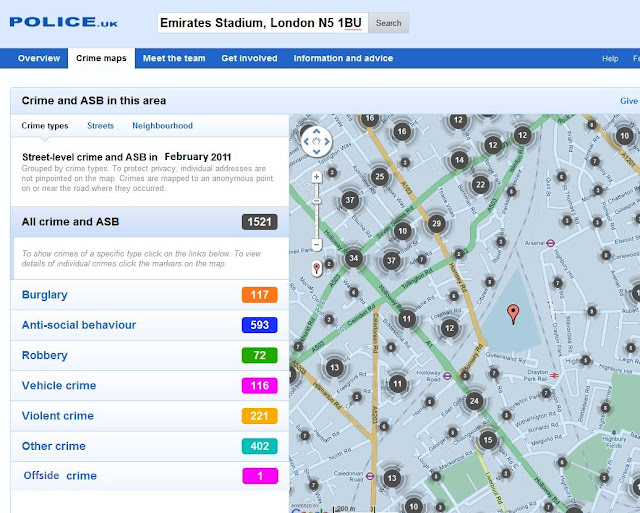 I get the London Underground into work everyday. The Victoria Line takes me door to door as is happens. As do many other people. Occasionally there's the odd delay in the service. Hey, occasionally there's the odd detective train and we get turfed off only to catch the next one. No biggy. You get used to it when you ride a 19th century mass transit system. But this morning was special.

First we were delayed between Euston and Warren Street. Then they emptied our train at Warren Street to regulate the service - planning to reverse the train up the line to cross over to the northbound line just outside the station. Then they couldn't do that as the train behind ours had come too close to the station platform and blocked the line. Then our train continued on it's way anyway without us in it. Then the next train pulled in. Packed of course. The that train was delayed due to a signalling failure at Victoria. Which was only affecting the 'new' trains not the 'old' ones. But there were plenty of new trains on the line so we all had to wait. So eventually we pulled into Green Park - my final destination - 25 minutes late.

While the 2nd train was waiting to depart Warren Street A scuffle broke out on the platform. The tube can be very hot and tempers were fraying. Someone had got off the train and barged someone else without apologising. Or they had, but the other guy hadn't heard him. How quickly the veneer of civility breaks down. Punches were thrown. OK, it's not quite Egypt but that was my drama this morning.

Last month Darren threw the last Shake Your Tail Feather of 2010 at the Royal Vauxhall Tavern. We danced, jived and shimmied. Great fun. 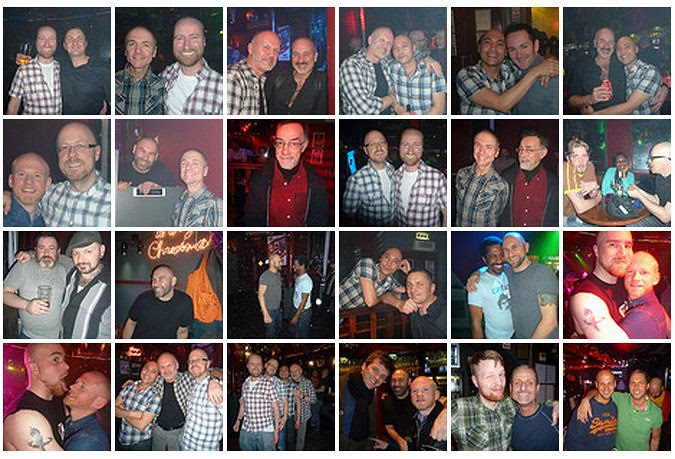