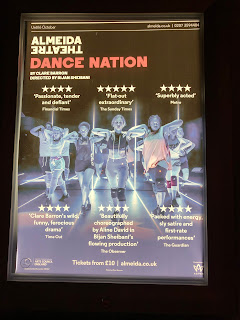 Gosh! What a show! Dance Nation maps the treacherous terrain between childhood and adulthood set among a group of teenage competitive dancers. It uses the tropes of the teen sports drama to conjure the raw force of early adolescence. And 'raw' it is!

Under the guidance of their dance teacher Pat (Brendan Cowell), a troupe of young performers are putting together a sequined salute to Gandhi in order to win a local dance competition. While Amina (Karla Crome) is the more gifted dancer, her friend Zuzu (Ria Zmitrowicz) seems the most emotionally invested in pursuing it as a career. It sounds like familiar teen drama territory, but Barron’s play is more subversive than that. It’s a ferocious, strange and layered piece of writing that captures the girls’ ambitions, the rituals of their friendship and the turbulence of puberty.

Bijan Sheibani’s production casts adult actors from across a range of ages as the tweenage dancers. The girls – and Luke (an amiable Irfan Shamji), the only boy in the troupe – express a mixture of awe and terror at the way their bodies are changing. They salute the beauty of their pussies (the girls use the word "pussy" a lot). They revel in their own burgeoning sexual strength. Kayla Meikle has the most potent of these speeches, a roof-raising moment in which she explores her insecurities about how the world views her and she views herself, and wonders what would happen if she stopped denying her beauty and strength. "I am attractive", she roars, "I am smart, I am great at sex, I am everything and you are going to worship me."

Crome is also great as the serious-minded Amina, and Zmitrowicz is typically brilliant as Zuzu, coming to terms with the fact she is not as talented as her friend.

Blood runs through the play. It gleams on the girls’ teeth, as if they were vampires, it pools in their gussets. One of the girls is seen washing out her bloodied tights while her mother provides kindly advice on tampon insertion through the bathroom door.

Movement has always been a major feature of Sheibani’s work and his regular collaborator, choreographer Aline David, puts the cast through their paces on Samal Blak’s trophy-lined dance studio set with its rotating glass panels. The cast all capture the complexity of what it is to be young and female and to suddenly occupy a certain space in the world, to still be playing with toy ponies while being eyed up by strange men in bus stations.

Barron’s play throbs with the knowledge that growing up is messy, brutal, exhilarating – and terrifying, absolutely fucking terrifying – all at the same time. At times, Dance Nation feels like a mixture of Carrie, Fame, a Judy Blume novel, A Chorus Line, Bring It On and the finale of Buffy the Vampire Slayer all tied together with a ragged red bow – and this, let me assure you, is a very good thing.

Posted by overyourhead at Thursday, October 04, 2018