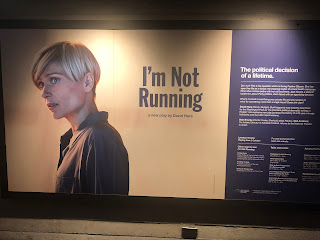 Last Friday night Stuart and I went to see David Hare's new play I'm Not Running at the Lyttelton on the National Theatre on London's glitzy South Bank.

Hmmmm. Where to begin? Well, let's start with some facts.

Over a prolific and successful career, David Hare has become a regular fixture at the National Theatre. He has been an Associate Director since 1984 and 17 of his plays, including Plenty (1978), The Absence of War (1993), and Stuff Happens (2005), have premiered there. Indeed, he has written some wonderful plays, such as Skylight and The Judas Kiss. I am just not quite sure that I'm Not Running is one of them.

Again, Hare brings his characteristic themes of British politics and public versus private relationships to the stage. It is a synoptic study of personal connection and political repercussions over 20 years, which we are told is entirely fictional (great care was reportedly been taken in the casting process to ensure there are no accidental resemblances to real politicians).

The main protagonist Pauline Gibson's experience as a doctor makes her a worthy leader of a local health campaign. But when a chance encounter with an ex-boyfriend puts Pauline right in the path of Labour Party loyalists, suddenly there's an opportunity to run as a candidate as leader. However, is it worth looking beyond single-issue politics and becoming a target of public scrutiny?

Well, sadly we are not really given much chance to find out. Doctor Foster star Siân Brooke leads the cast as Pauline and is very good. However, she (and we) are robbed of any close examination of the issues that would really matter in 2018. Why has the Labour Party never had a permanent female leader? What does the Labour Party stand for now in this divisive age? James Graham's outstanding Labour of Love tackled both these issues so much better.

In addition, talking of the wonderfully comedic James Graham, therein lies one of I'm Not Running's other main failings. The lack of humour. The "ex-girlfriend keeps ex-boyfriend guessing as to whether she will take his job" has a vast comedic potential. Potential that remained largely untapped. The only joke seems to revolve around whether the Labour Party is more interested policy rather than votes.

So this one is perhaps for Hare completest only I feel.

Posted by overyourhead at Thursday, October 11, 2018