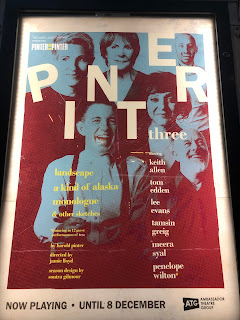 Last night Stuart and I went to see an amazingly dynamic and varied collection of Harold Pinter pieces at the Harold Pinter Theatre in London's glitzy West End.

Billed as part of the Pinter at the Pinter season, this night was called "Pinter Three" being the third collection. Superbly directed by Jamie Lloyd, it was a top night of potent and very funny sketches, songs, and plays by the great man.

The night started with Landscape - a minimalist marvel: a woman (Tamsin Greig) is locked in a beautiful memory and her husband (Keith Allen) demands to be heard. In the play, the couple seemingly don't hear each other - they just sit and recount their dreams and talk at each other not listening. We wondered whether the woman was in fact dead and simply in the man's imagination. A treatise in loneliness and isolation. Brilliant.

We were then treated to a selection of comedic sketches starring the rest of the cast including the famous sketch Apart From That, with Meera Syal and Lee Evans. "How are you?" "Fine" "Yes, but apart from that?"

One of the sketches with Keith Allen, Lee Evans, and Tom Edden all dressed as women gossiping about their trip to the butcher's was hilarious.

The first half then ended with Lee Evans performing the poignant Monologue. Was his imaginary friend dead?

In the second half, the sketches continued as did the laughter.

To finish the night off we were treated to the final play, A Kind of Alaska. This was another spellbinding evocation of loneliness, isolation and the strange mists of time. Deborah (Tamsin Greig) awakes from a twenty-nine-year sleep and is suspended between the conscious and unconscious worlds. Her doctor (Keith Allen) and sister (Meera Syal) are at a lost of what to say. How to tell her who is dead and who is alive. Or was perhaps Deborah herself dead? Haunting.

Posted by overyourhead at Friday, October 26, 2018