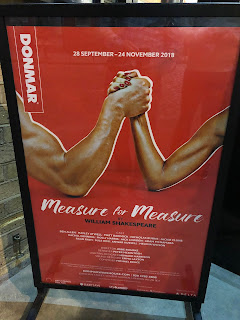 Last week Stuart and I went to see new production of Shakespeare's Measure for Measure at the Donmar Warehouse in London's glitzy West End.

What this really means in practice is we get to see the play performed as written in its original year of performance, 1604, in the first half and then repeated once again in the second half with the leads swapped - this time set in 2018. And it makes for a very long night indeed.

The acting is superb. The set simple. And the idea clever. But perhaps too clever to sustain a three hour performance running time. Sexual politics of the play aside - judge abuses his power to seduce a woman to save her brother - things just drag on. The message of "the tempter or the tempted, who sins most?" gets somewhat lost as the actors rattle through the second half like a shaggy dog story being retold with "she said" swapped for "he said."