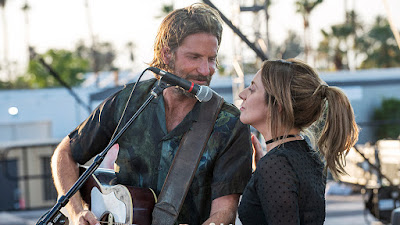 Last Saturday night Stuart and I went to see the latest version of A Star is Born at the Vue Cinema in London's glitzy Angel Islington.

Starring Bradley Cooper (who I love) and Lady Gaga (who I love even more) we had heard very good things so our hopes were high. Maybe too high though. I had seen the Barbara Streisand / Kris Kristofferson version nine times in 1976 - loved it to bits - so these were damned big boots to fill.

The first hour was good, great even. Both Cooper and Gaga were very convincing and the acting was excellent. However, once Lady Gaga turned into "Lady Gaga" at almost exactly 1 hour in, things changed a bit. Her appearance on Saturday Night Live seemed to be a turning point in the film from me. I know it was meant to be a turning point in terms of the balance of power between the two leads but it also seemed to take away a lot of the dramatic impetus from the story. And I started to lose interest. The rest of the film played out OK but it rather coasted along for me.

The songs were great. La Vie En Rose was lovely, the first time we see Shallow performed on stage was excellent (and even made me weep a bit) and also the final song that he penned but she sang by herself was very moving too. But overall for me the music the film was not a patch on the 1976 version.

Having lost our interest, even minor quibbles we had with the plot seemed to become bigger quibbles as the film went on. Cooper as director said they had to edit some stuff out for timing issues but they seemed to be missing out so many scenes or dramatic devices that might have displayed Gaga’s rise to power and also Cooper's fall from the heights. Clichés, I know, but there were no spinning newspapers, no talk show clips reinforcing his bad behaviour, no montages of her success and his failure. We only had the word of a few characters on screen for the shift in fortunes.

And I wasn't really convinced that Cooper’s character would’ve ended it all based on the evil English man’s single speech about how he was ruining Gaga’s career. Just tell him to piss off! And why at the end not just let the character take the motorbike not the truck and make it an accident not suicide (a la 1976?)

That said, the film was good, the music was good (apart from maybe the duff song at Saturday Night Live) and we did enjoy it. But our expectations had been so sky high, we wanted it to be great. Be amazing.

For me of the best moment in any of the four A Star is Born films I have seen is the final moments in the 1976 version. Back lit, Streisand walks on stage. The crowd is hushed as the announcer says, "Ladies and gentlemen, Esther... Hoffman... Howard..." I'm in bits, I'm in tears, I'm 14 years old in the front row of our local Odeon for the 9th time. Gaga could never fill those boots. Rose-tinted spectacles always trump La Vie En Rose-tinted ones.
Posted by overyourhead at Wednesday, October 17, 2018