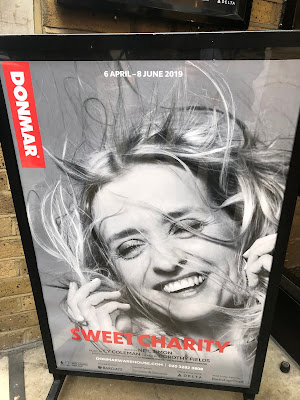 Last night Stuart and I went to see the wonderful musical Sweet Charity at the Donmar Warehouse theatre in London’s glitzy West End.

The original 1966 Broadway show with book my Neil Simon, music by Cy Coleman and lyrics by Dorothy Fields was conceived as a Bob Fosse vehicle. A very good vehicle it was too. After being a smash hit it transferred to the West End where is similarly wowed the UK crowds. And the film three years later was simply iconic. Bright, brash, and vulnerable Shirley MacLaine’s Sweet Charity probably goes down as one of Hollywood's best on-screen song and dance performances.

So here we are in 2019. Would a story of girls dreaming of boys and selling their time for money cut the mustard in the #MeToo world?

Before I answer that question let me just mention the outgoing director of the piece, Josie Rourke. It has been an amazing run of form with Ms Rourke as Artistic Director at the Donmar. Stuart and I have really loved her productions at this little theatre over the last decade or more. The place has enjoyed big hit after big hit.

And this being her very last production here - and starring, as it does, top notch talent Annie-Marie Duff and Arthur Darvill - we had very high hopes for the show. And lucky for us, these were (mostly) met.

The songs, of course, are amazing; Big Spender, There’s Gotta be Something Better Than This, Rhythm of Life, I Love to Cry at Weddings, and If My Friends Could See Me Now are all classics.

Ms Duff is a very good actor but perhaps only a so-so singer and dancer though. Which is fine, of course, because the emotional punch of the piece needs to be convincing. And she had me in tears.

You see Charity is a dancer. A dancer for money. And any old dream will do.

However, with such great songs to perform you can’t hope but feel a better songbird would've suited the role somewhat better. Arthur Darville was a revelation however. He can hold a tune, has great comic timing, and can even shuffle about a bit too.

The production itself was fab. All silver and glitter, and white plastic balls. Cute little signs popped up describing the action and the ensemble were excellent.

The scene we were most looking forward to was Rhythm of Live, which was of course made famous in the film by Sammy Davis Junior. Here it didn’t quite deliver the punch we had hoped for though as I think the effect they were going for was luminous day-glo paint and ultraviolet light with the cast wearing black costumes. Unfortunately, the stage was a bit too well lit to see this special effect come off perfectly.

And then we come of the sexual politics of the show. And lets face facts - it's all rather sexist. It's about a bunch of women selling their bodies in a dance hall while dreaming of meeting a man to take them away from all this. Sure, the women are gutsy survivors but as one of them says, "this is less like dancing and more like self-defence to music."

Charity isn't a winner in the game of life and the only positive note is struck ate on as the show ends with an uplifting encore of There’s Gotta be Something Better Than This.

Quibbles aside though, we had a fabulous night. We laughed, we sang, we tapped our feet, and we clapped our hands. It was an exuberant performance by the whole cast and you can’t help but get carried along with such a fantastic score.

We saw an early preview performance, and I have a feeling it will bed in and soon the show will truly shine.

Posted by overyourhead at Wednesday, April 10, 2019