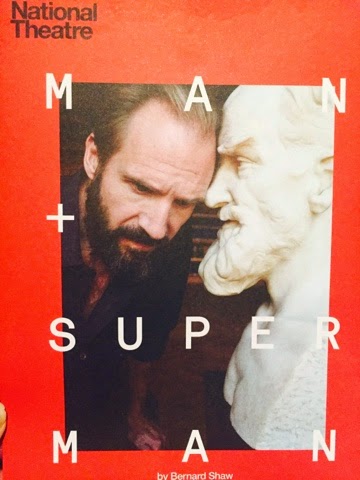 The play is as good as any Shakespearean play working as a comedy of manners, a comment on sexual politics, and a vehicle for Shaw's cosmic philosophy. It is very funny throughout being subversive, heretical and hilarious.

This National Theatre production sees Ralph Fiennes take on the role of John Tanner a well-educated political firebrand who thinks a lot, talks even more and during the course of the play is beguiled, bewitched and betrothed to his sparring partner the plucky Ann Whitefield.

Ann loves John and wants to marry him. To avoid this fate, John goes on the run to Spain. What he doesn't foresee, is that Ann will pile half of rural England into cars and follow. At one point, in a dream, he finds himself in Hell (an Act often omitted). He can't escape her there either. So this is love....  Man and Superman is a marathon play. Three and a half hours exploring courtship and marriage and the different states of manhood. From suitor to suit; from loafer to breadwinner; from getting wood to collecting it: marriage is the end of joy and free expression for a man and a victory for women.

Man and Superman has the feel of a sexist romp in Simon Godwin's playful production, and delights because it isn't. There is a strong feminist streak, albeit bedded in the idea of the maternal. Elegantly stated arguments inform the continuing vexations between the sexes. Fiennes beautifully articulates John's ideas as he scuttles with a loser's stoop across the chessboard of life, a King vainly dodging checkmate. He has some long speeches that must add to ninety minutes, but is ably supported by a wonderful cast including Tim McMullan as an oozingly charismatic brigand leader and, later, Satan. Mentions too for Indira Varma's confident Ann, Elliot Barnes-Worrall as a chirpy Straker, and Nicholas Le Prevost as Roebuck Ramsden. Oh and let's not forget handsome Nick Hendrix Hector Malone, Jr.

George Bernard Shaw wrote Man and Superman in 1903. Stuart and I, lured by Fiennes, did not know the story and were daunted by the length of the production, but after a bit of a dry exposition were pinned to our seats with smiles on our faces. It's not a play for people who prefer action. Every plot twist facilitates perorations on the same theme from different perspectives: women are driven by the need to procreate and populate the earth and men, powerful because they aren't, lose that power because they cannot resist women. Women therefore hold the power. What's so interesting is that, despite massive changes, Shaw's views on love and the flawed and ungiving institution of marriage remain current.

In conclusion: It could all be edited down (and may well be, as the National has a habit of crazed pruning at the preview stage) but the tone overall is so lively, and the story such fun, and the endings of the two halves so funny, that all is forgiven. There's also a fabulous, working, vintage Jaguar in one scene. It's currently sold out, but it's always worth calling for returns.