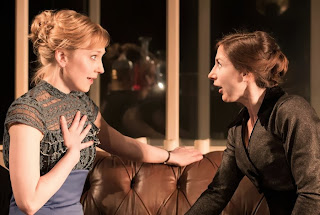 Last night Stuart took me to see A Doll's House at the Duke of York's Theatre in London's glitzy West End.

Ibsen's play has been reworked as a savagely funny version by Olivier Award-Winning Simon Stephens. And what a tour de force it is. It manages to be both moving and gripping.

Award-winning Hattie Morahan gives her five-star performance of a lifetime as Nora Helmer, alongside excellent Dominic Rowan, who plays her husband Torvald.

To say it is the best play I have seen on the London stage with year would be no exaggeration. The 1h 40m first half simply flew by; the 1h final act stayed but a moment. Glorious acting. A glorious production.

It is making a well-deserved transfer to Broadway.

Posted by overyourhead at Tuesday, October 22, 2013