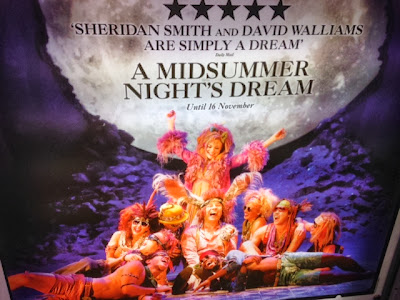 Last night Stu and I went to see A Midsummer Night's Dream at the Noel Coward Theatre in London's glitzy West End.

Walliams brings his best Frankie Howerd impersonation to the proceedings which actually works quite well in the context of playing a 'bad' but crowd-pleasing actor. Tit(ania) ye not. Smith is suitably luscious as the beguiled Faerie Queen and in many ways carries the piece.

Having the faeries all be hippies who smoke spliffs and take acid is actually quite a good production ploy as it leads well into the central conceit of the star-crossed lovers getting loved up on Oberon's flower juice.

Katherine Kingsley's Helena and Susannah Fielding's Hermia squabble entertainingly enough but the action really takes flight as their male lovers, Lysander (Sam Swainsbury) and Demetrius (Stefano Braschi), get down to their underwear. With all those rippling muscles and washboard abs on show it occasionally took on the appearance of an Abercrombie and Fitch advertisement. Dancing around the action is Gavin Fowler's Puck. A mischievous imp played to perfection.

All in all a great show: a super Puck, a funny Tit and a ripping Bottom. Go see!

Posted by overyourhead at Thursday, September 26, 2013