Laurie Anderson and the Kronos Quartet... 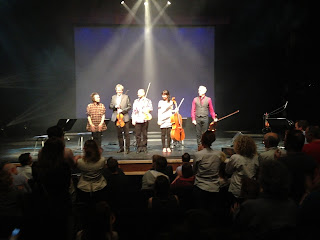 Last Friday Paul and I went to the Barbican Hall to see Landfall - Laurie Anderson's latest work - this time a collaborative work with the Kronos Quartet.

These two new musical colossuses joined for a 75 minute mildly whimsical and often diverting rag bag of pieces which were at times captivating but at times frustratingly brief.

Anderson's stories of Hurricane Sandy, her flooded archive and the frustration of other people telling you about their dreams were engaging enough but like the musical works all too brief.

It's almost as if Anderson was too deferential to the Quartet with their sublime fiddling and so lost her own captivating performance style.

One aspect that really worked though was when letters, symbols and words fluttered across a screen at the back, magically coordinated by some computer software to the sounds being played

Next time though let's have our Laurie back doing what she does best. Solo work.