Last night returning from a business trip in Holland I was caught out by the bad weather.

Originally booked on a 21:00 BA flight leaving Schiphol bound for Heathrow I discovered – quite by accident – that the flight had been cancelled. No explanation was given but I assumed it was due to the snow.

I dashed to the airport early trying to change my flight to another one. The only other one to Heathrow was at 19:30 and luckily I made it there in time. Well, my luck was running out as this flight was at first delayed too and then cancelled altogether due to a fault on the wing.

The last flight leaving Schiphol for London was a flight to Gatwick so I managed to get transferred to that instead. Of course that also was delayed due to hitherto unknown to me issue - frost on the wing. “British Airways pride themselves as being a ‘clean wing’ airline”

The plane taxied to a part of the runway before take-off where we were sprayed with super-heated steam from cherry-picker type machines. It was a bit like Thunderbirds.

Eventually we were given the all clear and took off. Luckily I managed to call my driver ahead of time so he was waiting for me at Gatwick instead of Heathrow I got back home by 23:30 - after 7 hours of travel. Phew! 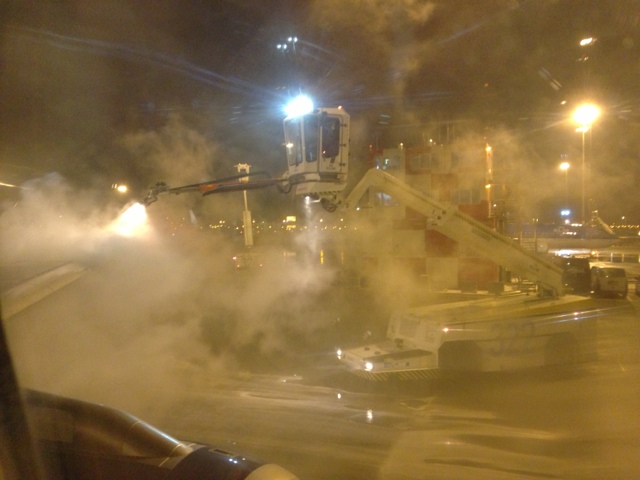 Posted by overyourhead at Wednesday, January 23, 2013