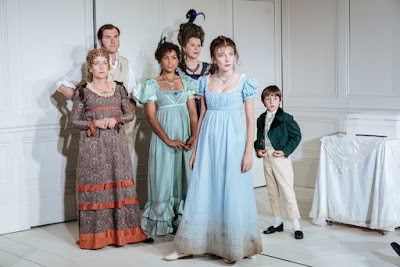 Last night Stuart and I went to see the universally acknowledged fun that is The Watsons at the Menier Chocolate Factory in London's London Bridge Quarter.

Jane Austen meets the Truman Show when the cast of an unfinished Austen novel learn that their lives have been made up. The Watsons sees a modern-day woman write herself into Austen’s abandoned story of 1803 in an attempt to bring them closure. But character ends up pitted against author in Laura Wade’s smart play, carried off with a wit and delicacy befitting the literary great who inspired it.

All of Austen’s archetypes are present: strong-minded heroine Emma Watson (Grace Molony), the Darcy-like noble chap she should marry, plus the aristocrat she shouldn’t. There are the multiple sisters, the cad, the fearsome matriarch, the wise servants. But fan-fiction turns into a clever concept through Laura (a brilliant Louise Ford), the author-figure who weaves herself into the action.

The Watsons is no doubt a playwright’s play. Laura must learn to respect limits of authorship, the ability of characters to write their own stories, and other such truths that will get the creatives nodding in the aisles. But in using these to raise questions about how we all determine our lives (whether in the plans we make, or even how we vote), the show also reaches a universal territory.

And there are surprises when the play traces Austen’s feminist influence through to the present day. As Laura’s modern politics take hold in the story, women cast off the patriarchal yoke to enjoy hook-ups and lesbian affairs. Regency-era ballroom dances give way to grime music and smartphones in an awfully polite riot directed by Samuel West.

Loved it.
Posted by overyourhead at Friday, November 01, 2019