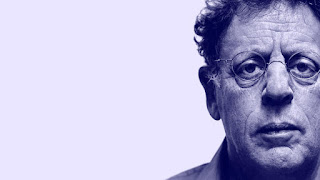 Last night Paul and I went to see/watch/hear/listen to the Philip Glass Ensemble perform/play/sing/recreate the magnificent Music with Changing Parts at the Barbican Hall in London's glitzy Barbican Centre.

Sadly the ensemble were without the great man himself due to illness, yet the night was as thrilling/exciting/mesmerising/hypnotic as we had both hoped.

Although the four pieces are performed as a continuous whole/joined/combined/piece, each has its own flavour/section/area/variety.

The night was simply magical. Four kinds of magical. Magical/fascinating/enthralling/spellbinding.
Posted by overyourhead at Thursday, October 31, 2019