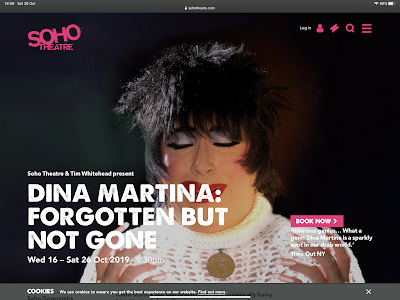 Joanna, Stuart and I had seen Dina perform at Provincetown Pride earlier in the year and the show was an expanded version of that.

Dina Martina's shows are a mash-up of live singing (off-colour and off-key), outrageous costumes, and hilarious video montages. It's a very knowing, high camp drag show and very funny. The show was called Forgotten But Not Gone! and featured a lot of British songs - not least West End Girls and Life in a Northern Town.

I'm sure the Pet Shop Boys and The Dream Academy would both laugh at their songs being lovingly murdered by an overweight drag queen with a quick wit and sparkle in her eye. My sides were literally aching from laughing.

Other comedic reinterpretations were Mungo Jerry's In The Summertime (as an attack on American over-consumption on Independence Day) and that classic Fever (re-worded as an attack on the anti-vax lobby). We were also treated to extended stories about earthquake clowns (!) and Dina's US presidential election launch video.