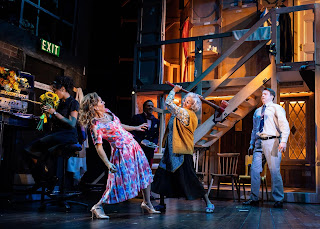 Last Friday night Stuart and I went to see the compelling, provocative play [BLANK] at the Donmar Warehouse in London's glitzy West End.

An adult daughter breaks into her mother's home to steal money for drugs. A pair of children haughtily divide their shared foster home room in two. A sex worker stands in the snow, waiting until she's made enough money to call it a night. A prisoner goes into labour in her prison cell. A woman in prison calmly explains to her sister how she intends to commit suicide. Another woman screams at a hospice unable to house her and her children to escape a brutal partner.

These are a selection of scenes from the twenty or so that make up Maria Aberg's production of Alice Birch's [BLANK], which are in turn chosen from the hundred that comprise Birch's full script.

The director can choose any number of scenes to be performed, in any order, by actors who can play characters of any gender and name. Happily, Aberg's company nail each and every scene. The action, at first disjointed, soon unspools to create a well-paced, transfixing evening. Recurring themes and characters lend the narrative a sense of cohesion, despite the play's initial fragmentary quality.

The all-female production marks 40 years of the theatre company Clean Break, which works with women who've been affected by the criminal justice system. As expected, a lot of the subject matter is sad – but it's backlit by Birch's pitch black humour. There are laughs in the sadness. For example, one scallywag explains how to "barely" have sex with someone ("You just lean back a bit"). Later, a child loftily informs her new roommate that if she thinks her carrier-bagged possessions are depressing, "You must not be familiar with famine and war and the current situation in Syria."

Birch offers uncomfortably realistic snapshots of both personal and political tensions. One particularly close to the bone scene is a brilliant, 45-minute depiction of a middle-class dinner party. Guests snort cocaine - treating their dealer as one of the family, rave about the labneh, and pay scant lip-service to the Me Too movement. That's until an outsider lambasts their "bleeding heart bubble of hypocrisy" – surely in part a dig at liberal elite-heavy theatre audience.

We, as audience members, are made acutely aware of our own complicity.

Indeed, some of the play's finest moments come when it skewers how society is so dysfunctional in scrutinising its problems, it treats violence against women as entertainment – such as a scene where a film maker lusts after "a fucking sausage sandwich" while reporting on a woman being murdered by her partner.

Designer Rosie Elnile makes good use of the Donmar's space, with scenes playing out in cell-like boxes stacked on top of one another. Meanwhile, the 16-strong cast deftly switch from one role to the next, with Sophia Brown giving a moving portrayal of mental illness behind bars, Ashna Rabheru offering a funny, poignant turn as an ill-fated Deliveroo cyclist, Kate O'Flynn a stupendous drunk lawyer, and Jemima Rooper and Jackie Clune both pitch-perfect genius in every role.

Inevitably, some scenes are better than others, which means the play feels patchy in places, particularly at the start. Nevertheless, this is a rich, devastating production that offers both a fine-grained portrayal of human relationships and a timely reminder of the cruel impact of incarceration on women.

A few of the scenes had us in tears - tears of sadness and tears of admiration for the top-notch acting.