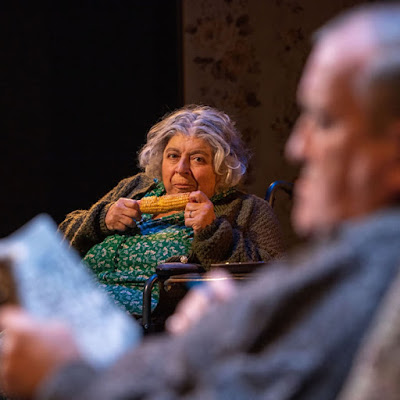 Last Friday night Stuart and I went to see Sydney and The Old Girl at the Park Theatre in London's glitzy Finsbury Park.

Some reviews had been rather sniffy about the play and others down-right rude. And a few of our friends who have seen it haven’t liked it at all. But, you know what? We rather enjoyed it.

Coming from Irish actor and writer Eugene O’Hare, this, his latest play, is in fact very funny. If you find intense dramas of family self-loathing funny - which we do!

Forget political correctness though, in this play any civility or polite conversation is long gone. These loathsome people are coarse, offensive and say some very dark things to each other indeed. But it's also brilliantly performed, gaspingly naughty, if perhaps a little overdone at times.

The set is a shabby flat with dated furniture, a faded floral carpet, a broken television set, and a door with marks of previous locks and handles. The designers Max Jones and Ruth Hall have really had a lot of fun.

Miriam Margolyes plays Nell Stock, a cantankerous woman in her late seventies, contemplating her own death. She spews demeaning hate toward her bachelor son Sydney, played by Mark Hadfield. Sydney is in his early fifties, allegedly rents a place of his own but is never there, and returns his mother's abuse with knobs on.

The saving grace in both their lives is carer, Marion Fee played by Vivien Parry, who visits at various times to make sure all is well, which it never really is. She is soon out of her depth though. She gets batted between the two old pros like a bedraggled shuttlecock.

Margolyes is great, Hadfield is too. And the finale a treat as the guilt of a dead sibling, the claustrophobic oppression of living together, and recriminations and ingratitude come to the burning fore.

We really rather liked it.

Posted by overyourhead at Monday, November 25, 2019