Today Andrew, Michael, Darren, Tim, Andy, Andrew, Kevin, Stuart and I took a boat trip to some of the islands off Phuket in Phang Nga Bay itself nestled in the emerald-green Andaman Sea.
Famous for its gravity-defying limestone formations, the islands are a must-see for any traveller coming to Phuket.
Correction: for EVERY traveller coming to Phuket; they were all packed!
We started our day early, 7:30am, when we were picked up by air-conditioned van from our hotel and transferred to Boat Lagoon Marina in Phuket Town on the other side of the island.
There we boarded our speed boat which was clean, seated about 35, and seemed solid enough. It was a solidity we would welcome towards the end of the day.
First stop was tourist trap Khai Island. Nevertheless we disembarked, swam in the glorious blue ocean, spotted all manner of fish, and drank an overpriced milk shake. (Beer only sold after 11am, the swines!)
Next stop was an island of Joan’s Cave. We donned hardhats and climbed up into this elevated cave. The place was big, damp, dark, muddy and moody. We escaped with only a few bruises and cuts.
We then moved on to do some scenic sea canoeing at Hong Island which, though also packed with over 100 other canoes, was actually great fun. Lots of rock formations (elephants, turtles, piranha, upside-down chickens, Scooby Doo!), sea caves, and beautiful blue lagoons.
Leaving there, and being halfway through the trip, we stopped for a buffet lunch on Panyee Island. Panyee island is a floating village complete with a floating houses, a floating school, and a floating football pitch.
The food was great. The floating village actually very nice. Would I want to live there though? Well, no quite frankly. Being a Muslim village no beer was sold. It was turning into a very ‘dry’ day.
After lunch we visited the place we had really come to see. James Bond Island - named after the 1974 film The Man with the Golden Gun had many iconic scenes shot there.
The island was lovely. But just so packed with people.
Finally we stopped at Pair Island with the intention of finally buying a beer and having a swim.
A few sips into the beer, a tropical storm hit and the heavens opened. So no swimming. Thunder, lightning, torrential rain meant we had to take cover until the worst had passed.
We then set out in our speed boat one final time to return to Boat Lagoon Marina. En route the last of the rain insisted on drenching us for good measure. The sea was a little choppy due to the storm - hence the previously mentioned solid nature of the boat helped keep us on an even keel.
Back on dry land, we boarded our air-conditioned van to be transferred once again to our hotel.
A nice way to spend a day - going from tropical island to tropical island - but we were pretty glad to be back in terra firma. 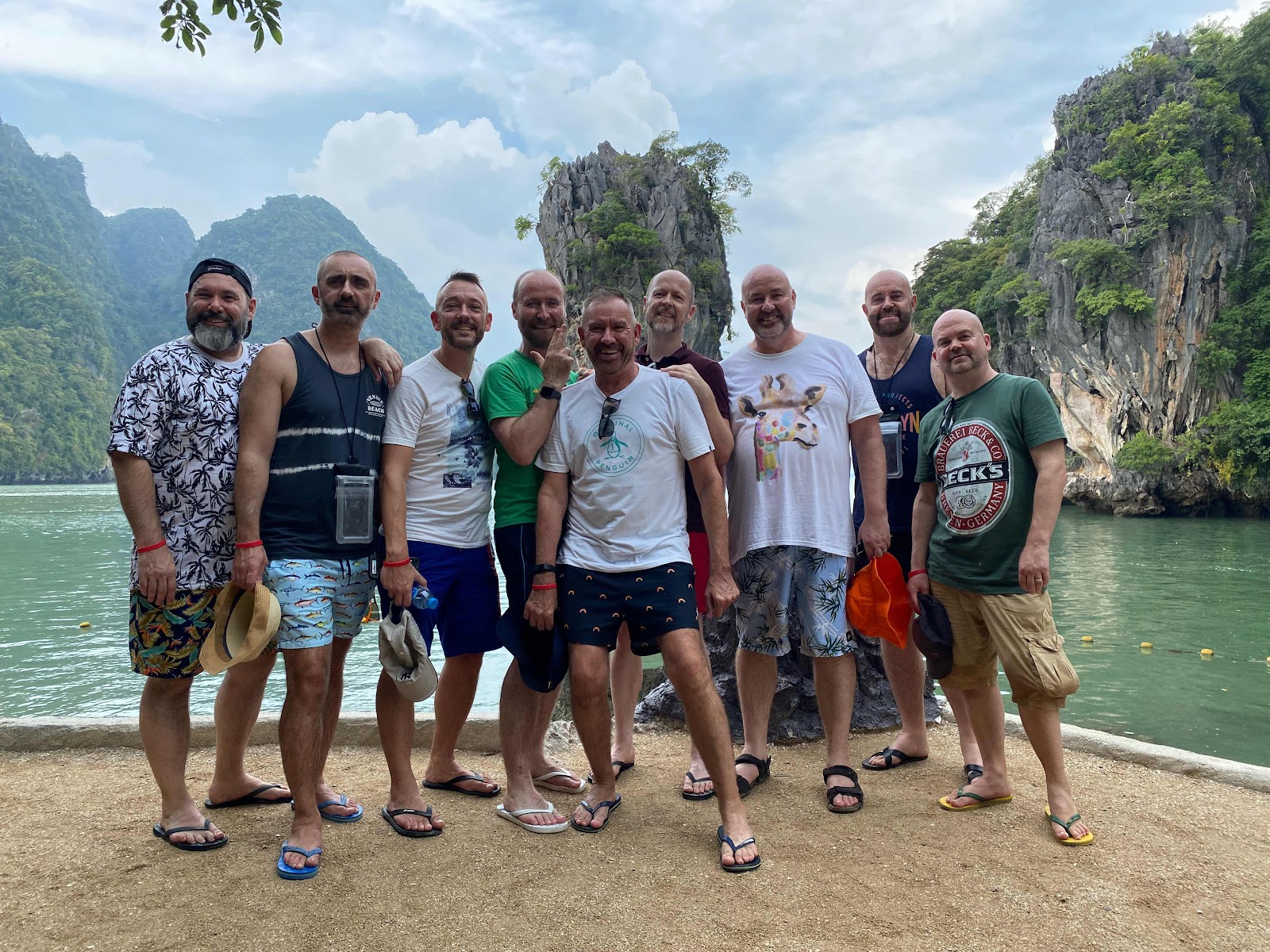 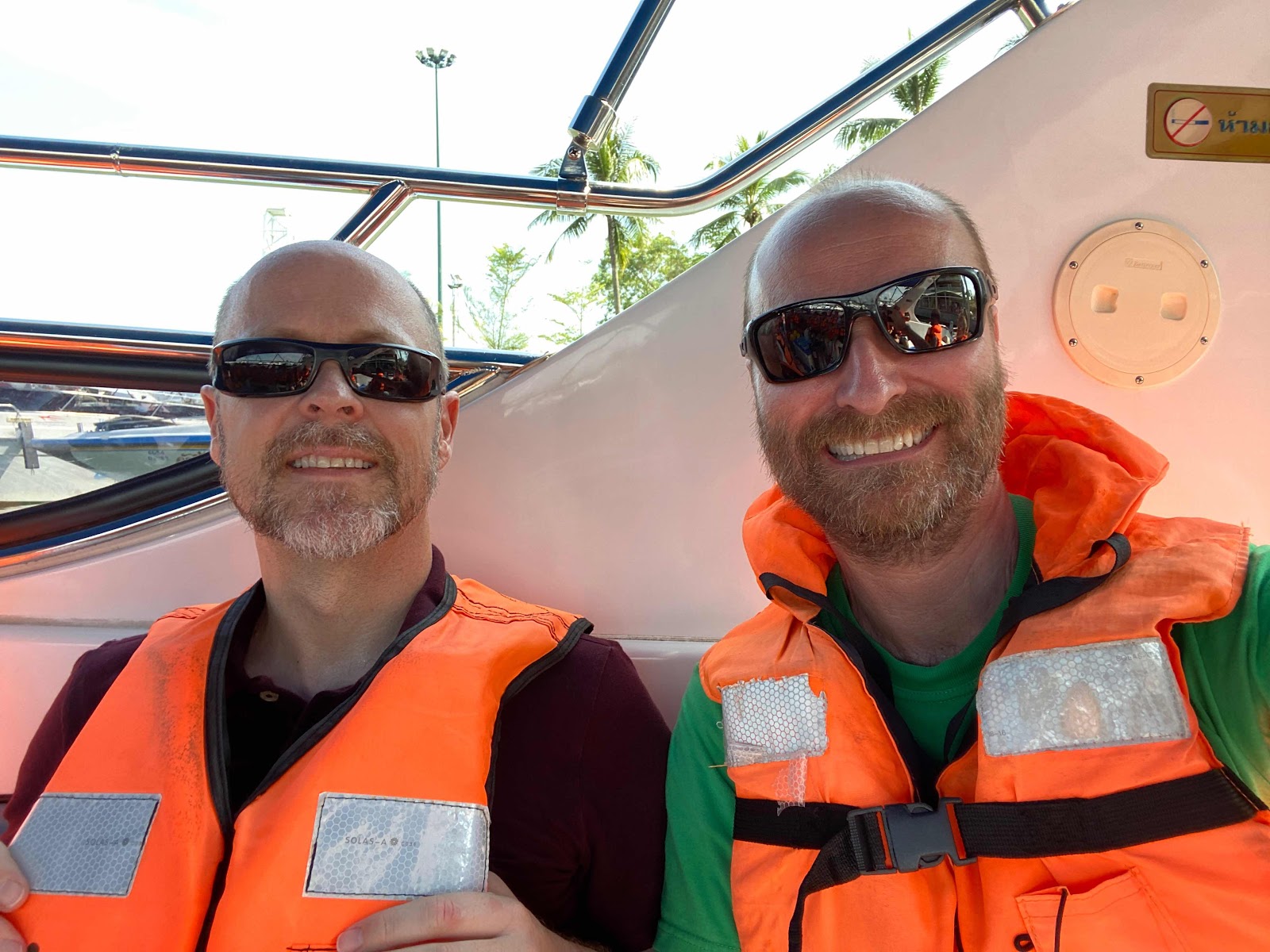 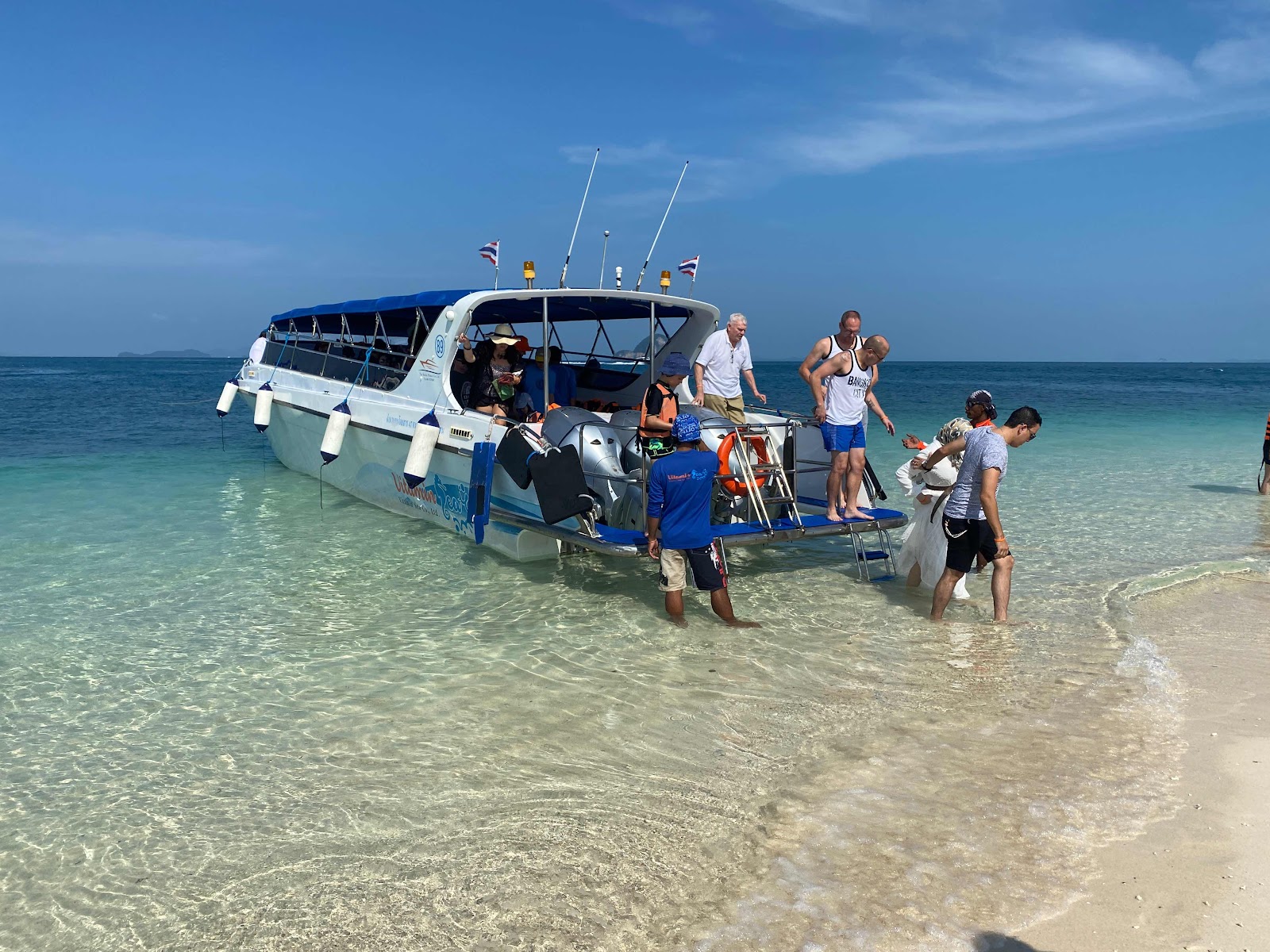 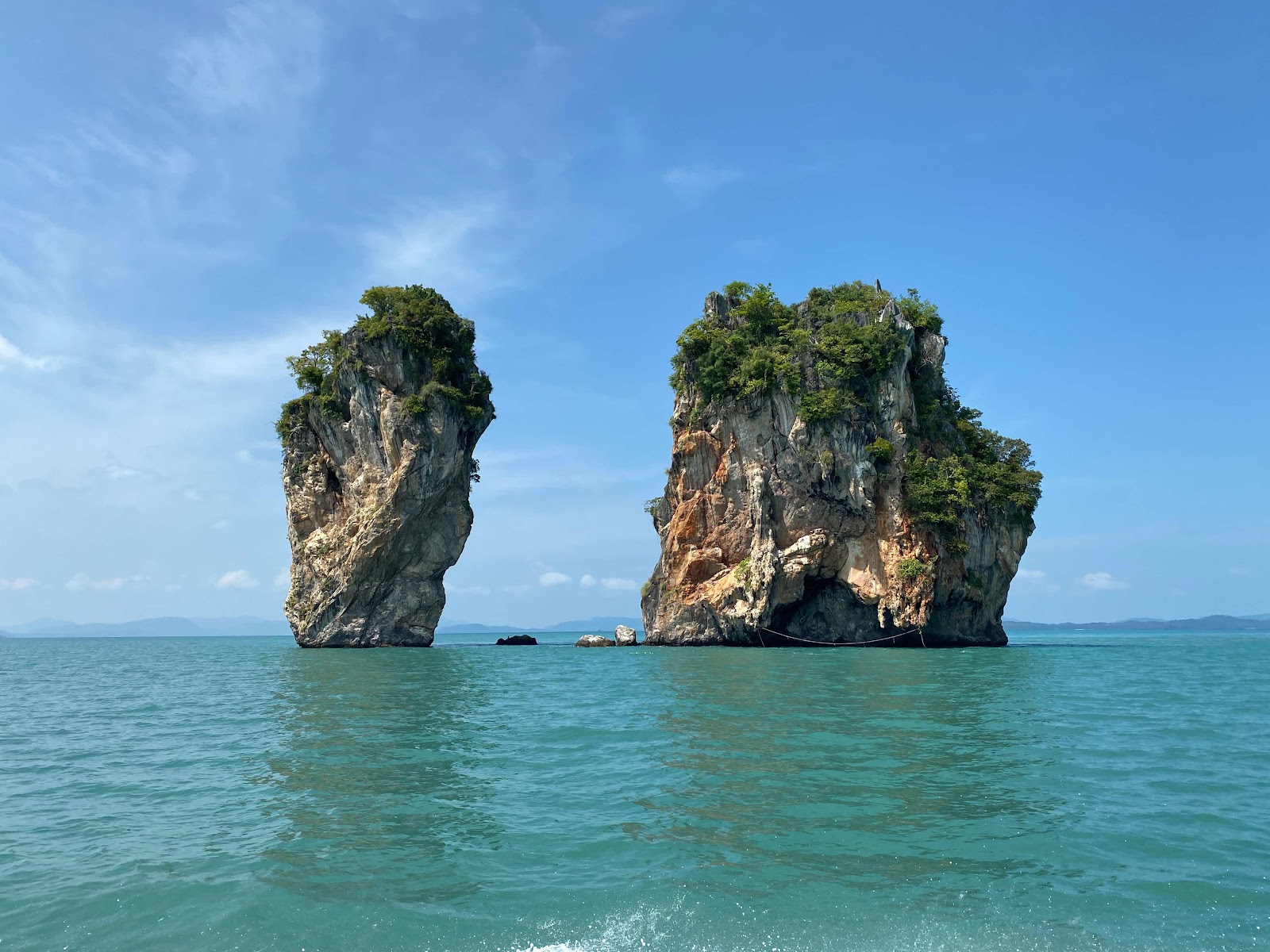 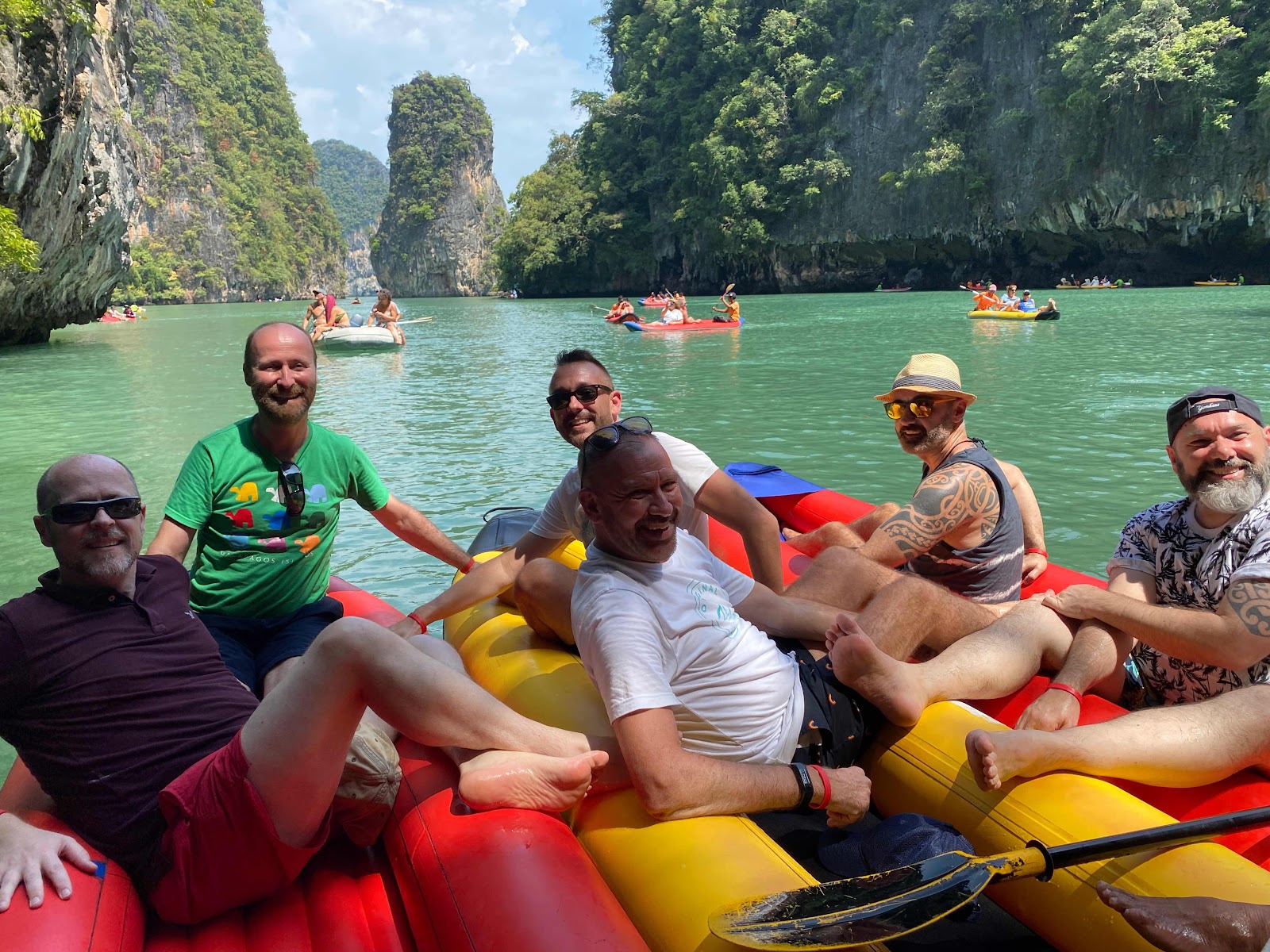 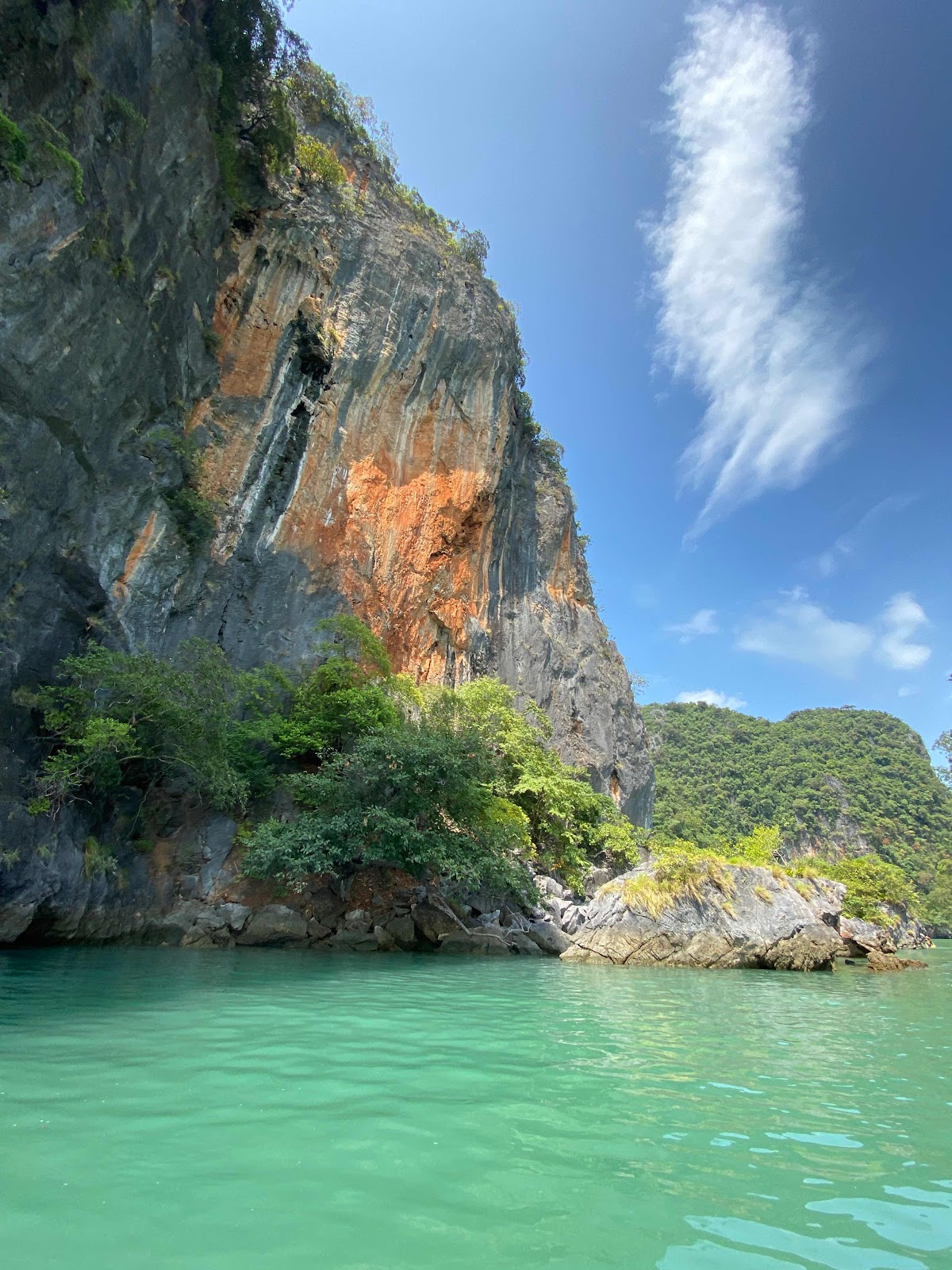 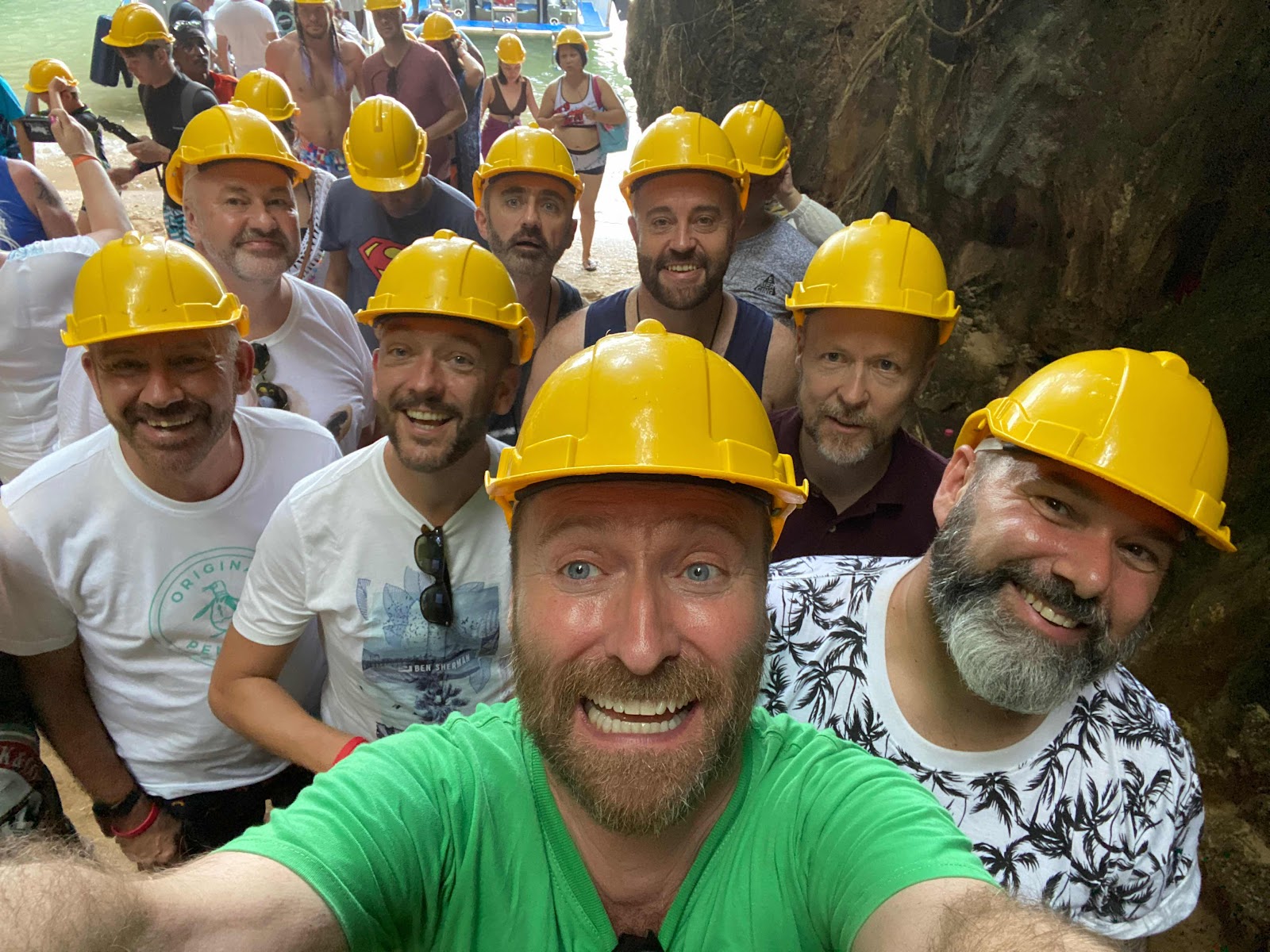 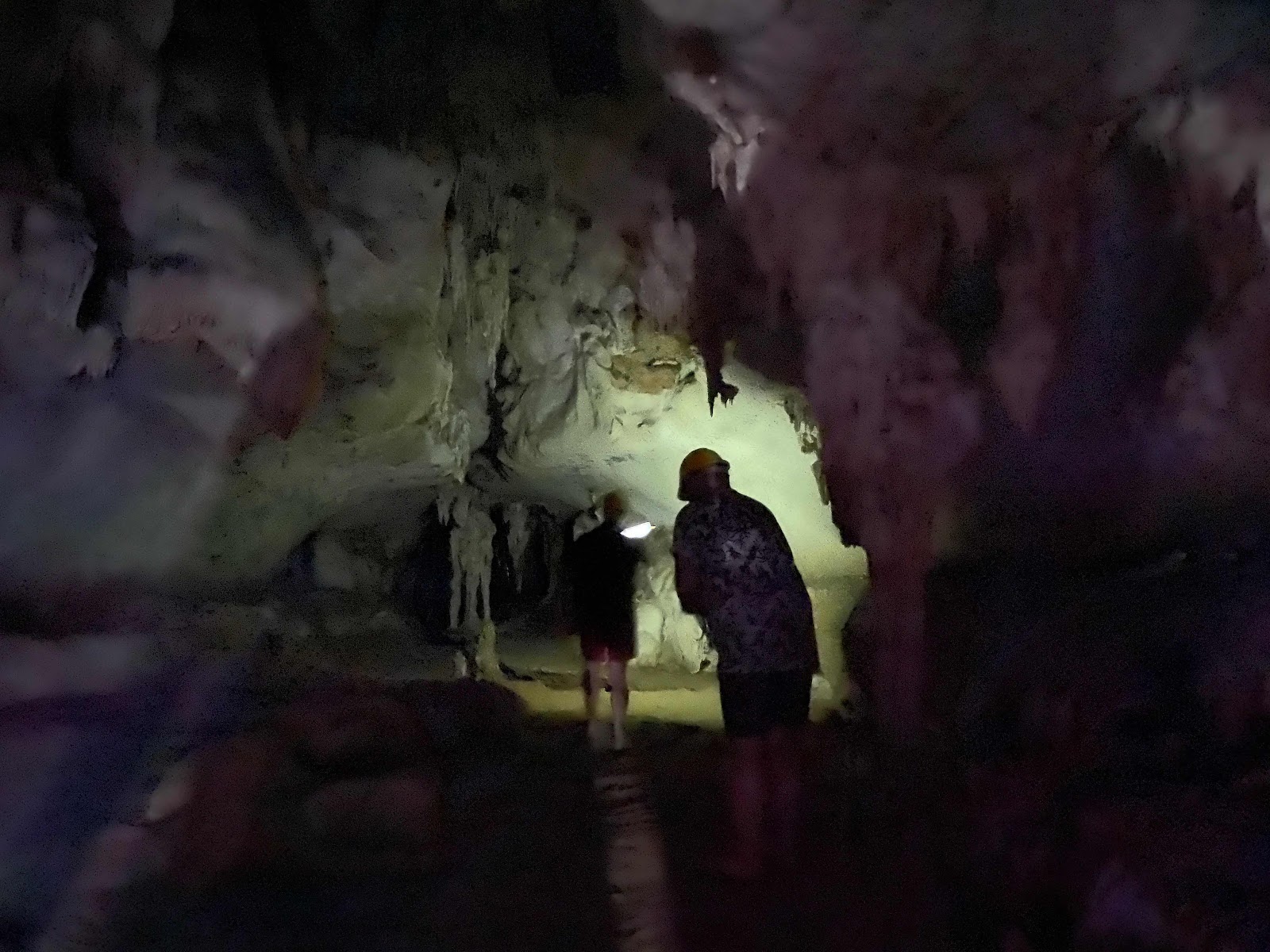 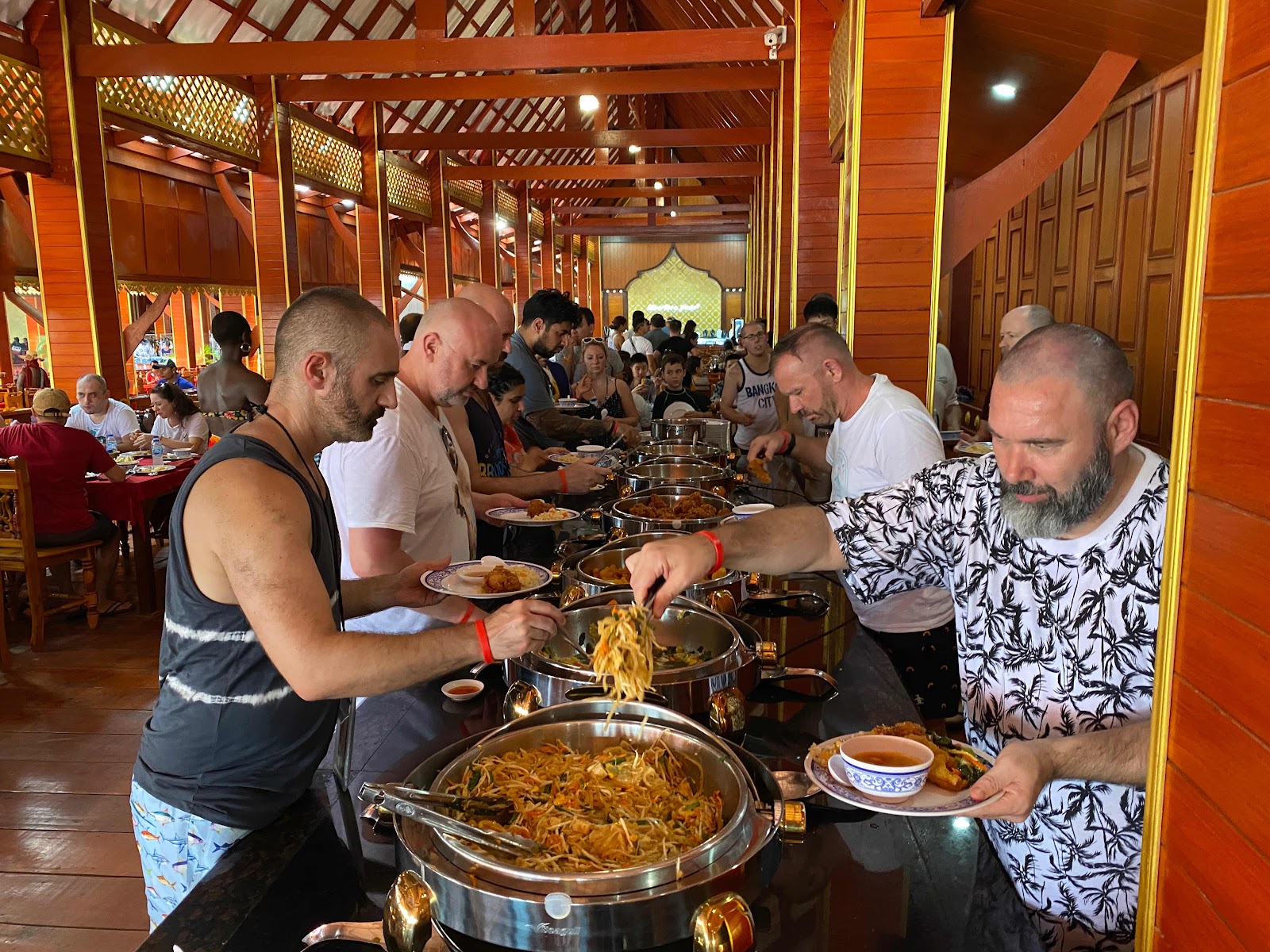 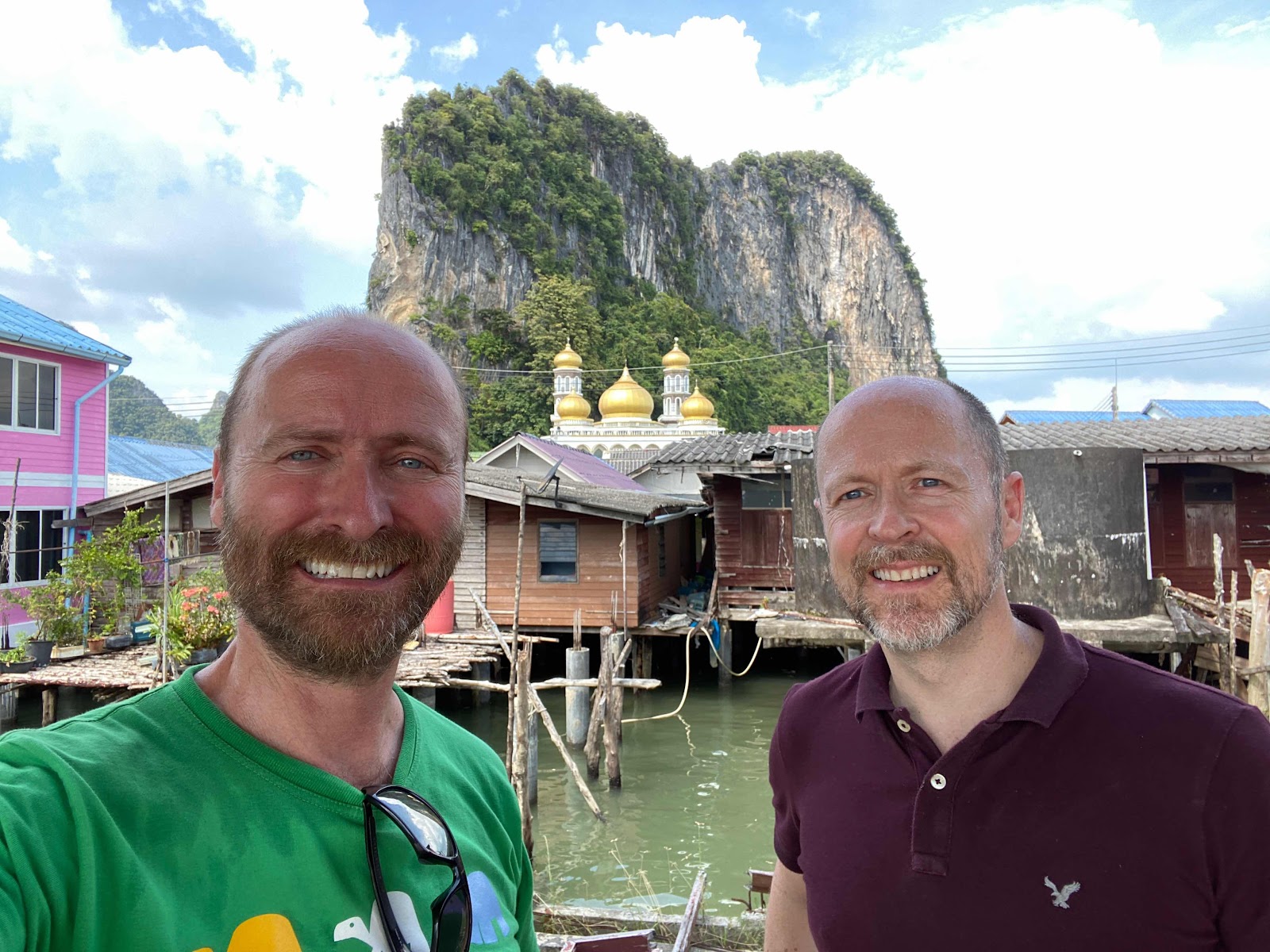 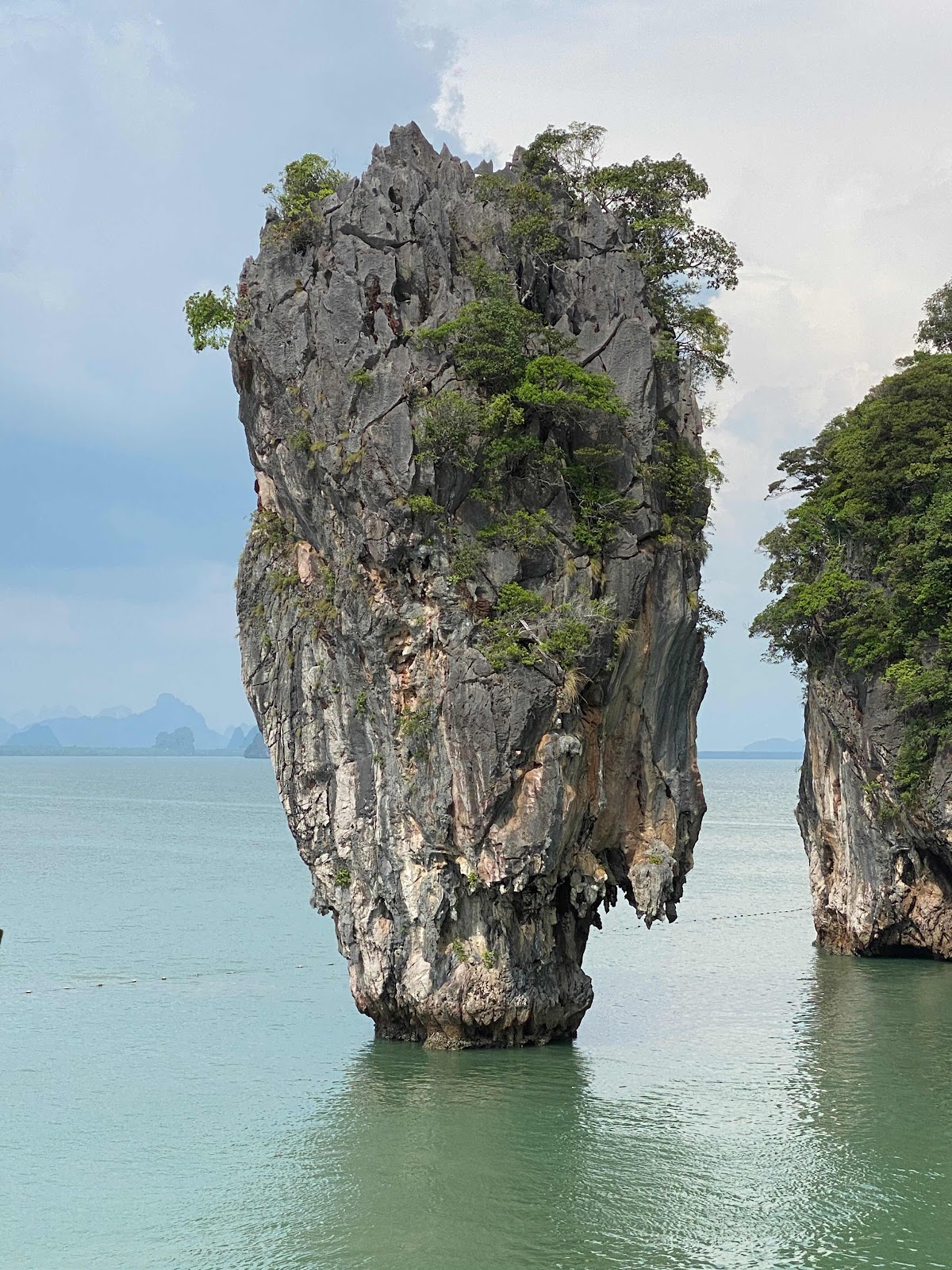 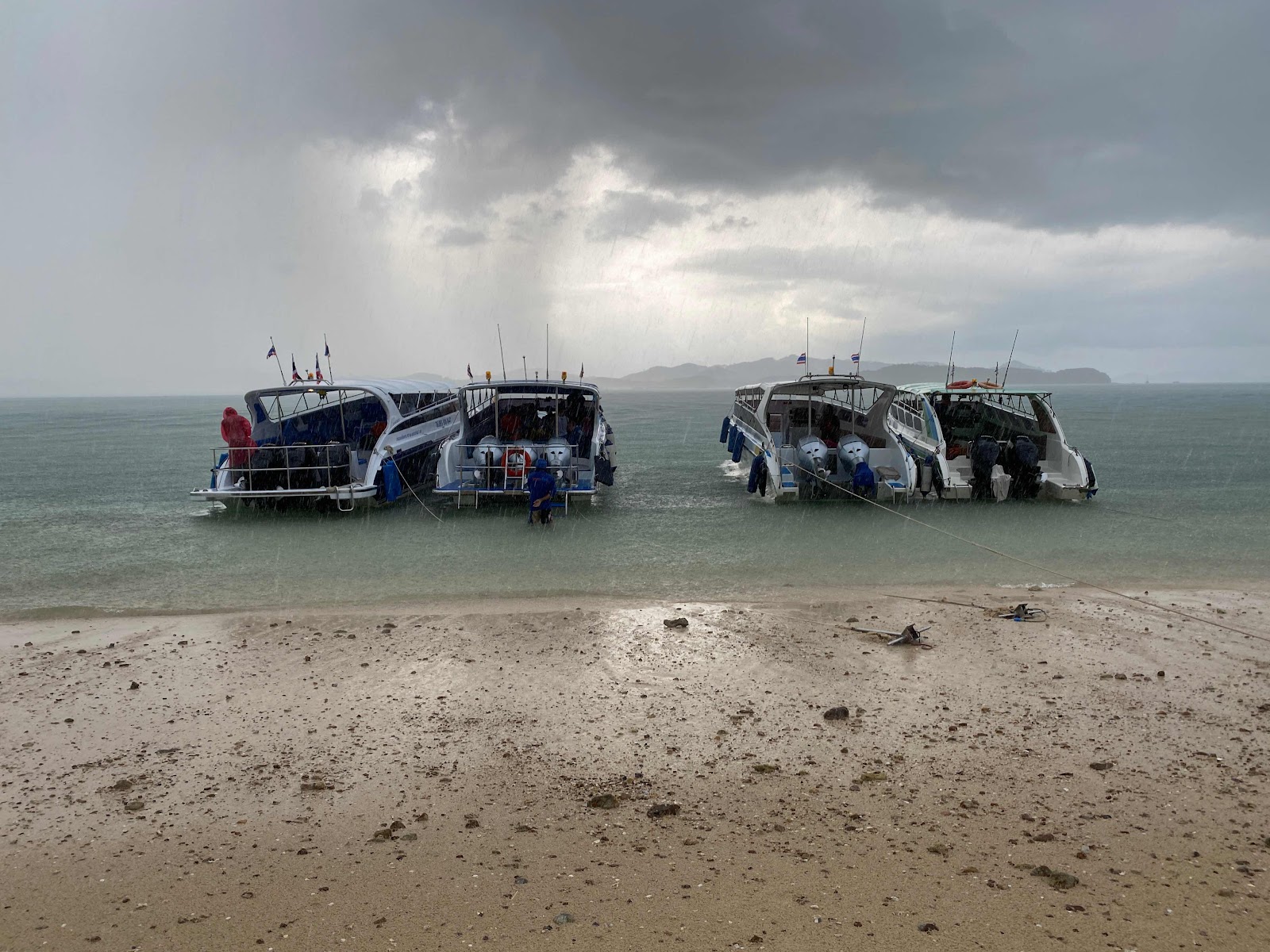 Posted by overyourhead at Friday, November 15, 2019